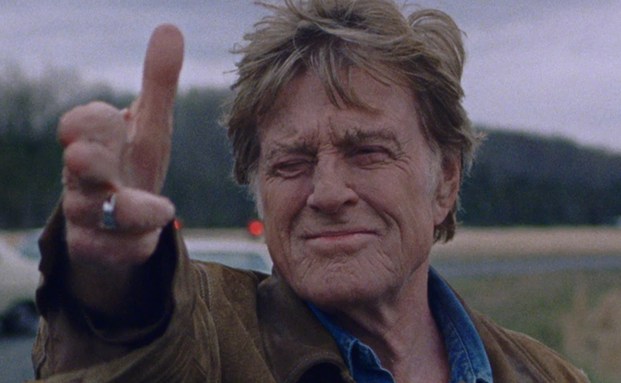 Robert Redford says he is retiring from acting — if not directing and/or producing — and that The Old Man and the Gun will be his last film in front of the camera. He’s 82 and has been saying that quite often now, so we tend to believe him. But it still seems a shame since he is at the height of his thesp powers as Forrest Tucker (not to be confused with the former F Troop star), a real-life senior-citizen bank robber who, unlike the man playing him, is not letting age stop him from continuing his remarkable life of crime. And, as I say in my video review, remarkable it is.

Starting as a teenager, he was in prison 16 times — and out just as many thanks to his uncanny ability to escape. Known as a gentlemen robber, the well-dressed criminal always was polite in holding up his various targeted banks and, at least in Redford’s hands, has such effortless charm you can’t help but root for him and hope he gets away with it all. Of course that doesn’t fool John Hunt (a swell Casey Affleck), the detective who is tracking him down like he is the FBI’s Most Wanted but has a budding regard for his talents as the pursuit continues.

Into this mix comes Jewel (a wonderful Sissy Spacek), a woman he meets and charms as they strike up a touching and believable mature relationship that is just a pleasure to watch as two old acting pros play it with pitch-perfect authority and style. She isn’t aware of his past — or present — and that is what makes it so effective, even when she finds out. Scenes with her are splendid, and so are the interludes with his over-the – hill gang of accomplices Teddy and Waller, played respectively by Danny Glover and an especially terrific Tom Waits.

But this is all Redford’s show, and you can tell why he was attracted to this role: a slam dunk for the actor who has played irresistible outlaws and con men in the past (think his collaborations with Paul Newman in Butch Cassidy and the Sundance Kid and The Sting). Director-screenwriter David Lowery (adapting the New Yorker article on the real Tucker by David Grann) even incorporates footage of Redford from his criminal-movie past with a scene of him as a convict on the run in 1966’s The Chase, at the beginning of his legendary screen career. Lowery worked with Redford in the 2016 Disney remake of Pete’s Dragon and clearly knows what makes him tick onscreen.

The star has a seemingly effortless charm he radiates here and never overplays it, instinctively knowing how much to give. If this is to be Redford’s last movie role, he is going out with a bang, but let’s hope he reconsiders. This is what movie acting is all about.

Do you plan to see The Old Man and the Gun? Let us know what you think.