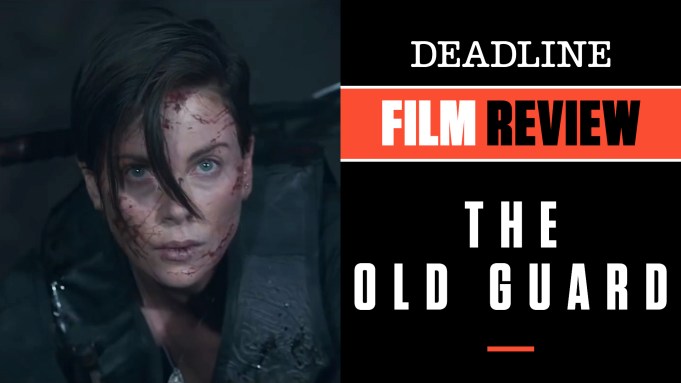 Smartly diverse casting in front of and behind the scenes adds a whiff of freshness to the comic book genre with The Old Guard, an action entry likely to kick off a smart genre franchise for Netflix, which starts streaming it Friday. Charlize Theron is the veteran leader of a pack of immortal mercenaries, a ragtag quartet who were once killed but quickly returned to life and have bonded over the centuries to fight crime where it needs to be fought, but seem weary that human history just can’t seem to stop repeating itself. In The Old Guard, she proves again she is tops in the action field, as if that needed proving after stints in Atomic Blonde, The Fate of the Furious, and of course, Mad Max: Fury Road.

Here as Andy, who first learned she couldn’t die centuries before as we see on a battlefield with her close dying companion Quynh (Van Veronica Ngo) in occasional flashbacks that still haunt her, Theron has a been there-done that attitude as she takes on what is thought to be an assignment to help a number of teens in South Sudan as the bequest of ex-CIA’er Copley (a shrewdly cagey Chiwetel Ejiofor). That doesn’t turn out to be the case, and is actually a ruse to try to capture some of her troupe for DNA experiments by the head of a pharmaceutical company, and our chief villain Merrick (Harry Melling of Harry Potter fame). He wants the info and key to what makes them tick and will stop at nothing to get it.

In no time he has compromised immortals Joe (Marwan Kenzari) and Nicky (Luca Marinelli), who have been joined at the hip since falling in love during the Crusades. Putting a gay couple in key action roles in a franchise-wannabe like this is not only different, it is refreshing, just one of the nice diverse touches in Greg Rucka’s adaptation of his graphic novel. Gina Prince-Bythewood (Love & Basketball, Beyond the Lights) is also an inspired if unexpected choice to direct, and she acquits herself nicely behind the camera on this large-scale production, deftly balancing big martial arts-style action with well-developed character scenes.

At any rate, that stop in South Sudan leads to the rare discovery for Andy of yet another immortal who unknowingly is about to be indoctrinated into her never-ending life, the first they have come across in roughly 200 years. That would be U.S. Marine Nile Freeman (KiKi Layne), a kickass recruit who becomes a very reluctant mentee in this fight. Layne (If Beale Street Could Talk) demonstrates talents she didn’t get to show in that Barry Jenkins film, and she electrifies the screen here, a perfect match for Theron. The other component of this group is Booker (an excellent Matthias Schoenaerts), a somewhat morose guy who can’t help dwelling on his past(s) that started for him during the Napoleanic Wars.

Somehow there is lots of excitement here, even though at its heart we know there is no way they can kill our heroes, whether by stabbing, shooting, beating up or any other method, and I suppose that, like X Men, is why it makes for an irresistible franchise candidate. Certainly this is a very watchable and likeable bunch, and if you stick through the credits you will see their numbers could be ripe to grow. For those who need a summer comic book fix, this hits the mark nicely.

Theron, A.J. Dix, Don Granger, David Ellison, Marc Evans, Dana Goldberg and Beth Kono are producers of the Netflix and Skydance enterprise. Check out my video review above with scenes from the film.

Do you plan to see The Old Guard? Let us know what you think.