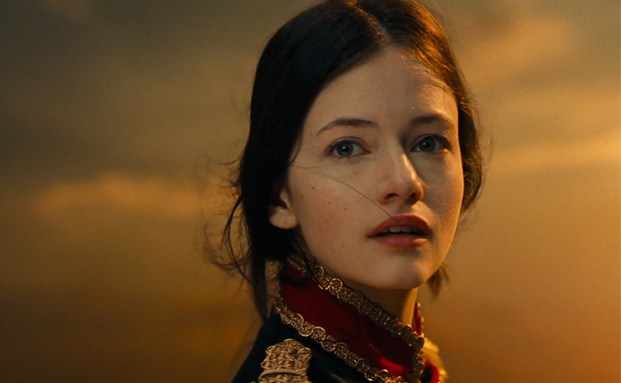 So you know the holiday season is upon us when The Nutcracker shows up. We have seen it  in various forms over the years, decades, centuries even, but for me it always has been associated with the time-honored ballet definitely performed everywhere at Christmastime. Or so it seems.

I suppose it was inevitable that Disney would try to cast its spell over this cultural phenomenon, and it has in this loose adaptation of E.T.A. Hoffman’s classic book The Nutcracker and the Mouse King, which shares inspiration credit with the ballet for Ashleigh Powers screenplay (including uncredited work from Tom McCarthy). This film also has two directors: Lasse Hallstrom, who was in the chair first, and Joe Johnston, who CGI’d it up when he came in for reshoots. Perhaps that is why it doesn’t so much appear to be the work of a filmmaker with a singular vision as much a confederacy of craftspeople to try and renew the magic of this immortal work by Disneyfying the whole enterprise. It is very old fashioned in the feel of it, a PG-rated G movie that, to be honest, I was expecting to be largely a filmed ballet. However, those sequences simply amount to two scenes with American Ballet Theatre’s diva Misty Copeland and Ukraine’s star Sergei Polunin (and one of those dance scenes is during the end-credit finale). No, as I say in my video review (click the link above to watch), this film seems mostly an attempt to cash in on the holidays and try to reproduce the magic of Disney’s billion-dollar darling Beauty and the Beast, the movie it most closely resembles without the songs.

This is a movie where you come out humming the scenery, and it is so sumptuous and visually resplendent that you won’t mind if the heart of the film seems like a mishmash of other studio attempts at this kind of family fare run amok. Let’s face it: When you have the likes of a team of Oscar-winning artisans doing your bidding, there is something mouth-watering to behold, and the reported $120 million budget is obvious, from the cinematography of Oscar winner Linus Sandgren (La La Land) to the gorgeous production design of Oscar winner Guy Hendrix Dyas (Inception) to the costumes of Oscar winner Jenny Beavan (Mad Max: Fury Road) and the sensational makeup from Oscar winner Jenny Shircore (Elizabeth, Beauty and the Beast). They have all done a yeoman-like job to put you in the world of the Nutcracker, where these toys come to life in a parallel universe into which our rather dreary heroine Clara (Mackenzie Foy) is thrust.

She is a tomboyish young girl whose mother has just died and she is grieving the loss. During the annual Christmas party thrown by her Godfather Drosselmeyer (Morgan Freeman), Clara receives a gift her mom had left behind for her: an egg-shaped music box that needs a missing key to be opened. This sends her hurtling, a la Alice into the rabbit hole, into an alternate land of mice and men, and queens and sugar plum fairies, straight into the Four Realms of the title. She meets up with Phillip (Jaden Fowora-Knight), a soldier acting as a kind of guide, along with Mouserinks, a scalawag of a CGI rodent with a penchant for stealing the key and leading them on a chase with encounters of all sorts, including a moving tree full of mice. Eventually she meets Shiver, Hawthorne and Sugar Plum Fairy (Richard E. Grant, Eugenio Debrez and Kiera Knightley) — the respective regents of the three Realms: Snowflakes, Flowers and Sweets. They all have been incessantly loyal to the Queen, who happens to have been Clara’s mother. The latter apparently was in conflict with Mother Ginger (Helen Mirren), who was banished to the much darker and disturbing fourth Realm but whose wisdom will belie her tough exterior to come in handy when one of these characters turns evil and maniacal in an unexpected twist to the story that sends it all into familiar good-vs.-bad territory.

The cast does the best they can — especially Knightley, who adopts a kewpie doll/Marilyn Monroe-ish voice and seems to be having a better time than anyone else in the cast. In terms of screen magic, though, it is the behind-the-scenes players who deserve the most credit (James Newton Howard’s score is also aces, and there’s a lovely end-credit song “Fall on Me” sung by Andrea Bocelli and his son Matteo). Ultimately, this film’s ambitions fall short of The Wizard of Oz, Nutcracker being the second Disney fantasy after the spring release A Wrinkle in Time to try to reach that level and miss the mark. But then how do you beat that 1939 classic kids film, even with all the advanced CGI in the world? Still, as a holiday attraction it will have to do for Disney until Mary Poppins Returns next month. Producers are Mark Gordon and Larry Franco. Disney opens it tomorrow.

Do you plan to see The Nutcracker and the Four Realms? Let us know what you think.