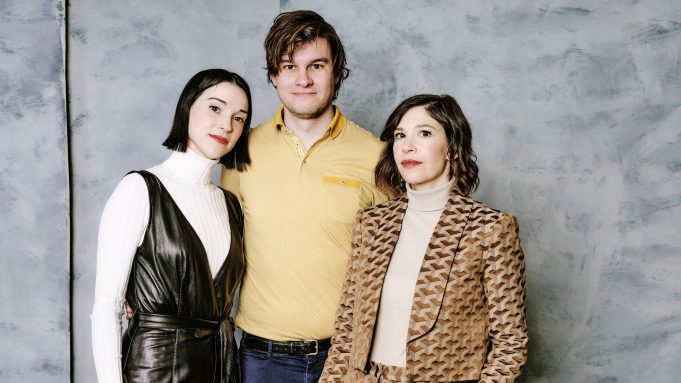 In 2017, St. Vincent approached her longtime friend Carrie Brownstein, to helm a feature in which she would star—a concert documentary, with scripted sketches mixed in.

A two-time Grammy winner, also known as Annie Clark, St. Vincent was on tour at the time with her sixth record, Masseduction. A multi-talented artist known for her sketch series Portlandia and her band Sleater-Kinney, Brownstein came on board the project, at which point the essential nature of the endeavor changed.

“When we had the original idea, we started to realize as we were writing it that there was too much of a discrepancy between St. Vincent, and the aesthetic that she embraces, and the heightened nature of her shows, and her artwork, with this sort of inherent clumsiness and looseness of sketch,” Brownstein says. “So, then we decided to just make a narrative film, and employ this hybridity that speaks to the ineffable nature of her music, and music in general. It kept shape-shifting until we landed upon something that was unique, but very different from where we started.”

Directed by Bill Benz, The Nowhere Inn is a meta journey, following Brownstein and St. Vincent, as they set out to make a film. With Brownstein in the director’s chair, the friends aim to get at the heart of the person behind the persona that is St. Vincent.

Playfully dissecting notions of reality, fame and identity, the film was a fun opportunity for Brownstein and St. Vincent to play with their public personas, while reflecting on ideas that had preoccupied them throughout their artistic journeys. “A lot of the themes that we address in the movie are things that we’ve talked about for a really long time,” Clark explained, while sitting down at Deadline’s Sundance Studio with Brownstein and Benz. “The idea of what is authentic, what is aspirational…”

For Clark, the exciting idea at the core of the project was to get at “really heartful, truthful things,” in the most absurd and circuitous manner possible. And while Brownstein and Clark are at odds throughout much of The Nowhere Inn—as Clark becomes increasingly detached from reality—in real life, the relationship between the two is quite different. “In terms of our collaborative process, it’s very trusting, and I think we play to each other’s strengths,” Brownstein shared. “There was just a vulnerability that I think we allowed each other, in terms of the whole process, and Bill was a part of that, too.”

For more from our conversation with the director and stars of The Nowhere Inn, click on the video above.