Continue to Deadline SKIP AD
You will be redirected back to your article in seconds
Skip to main content
January 26, 2019 5:26pm 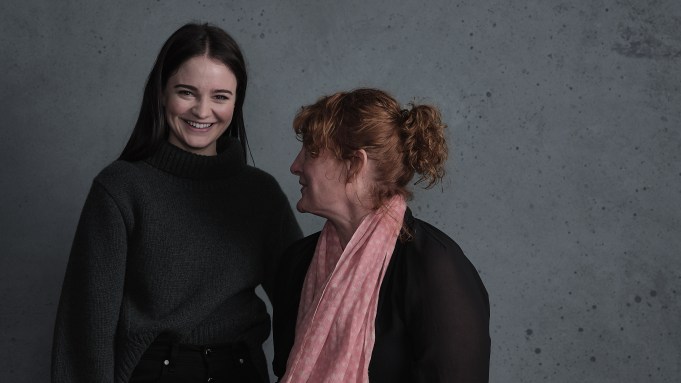 When Jennifer Kent brought her first feature to Sundance in 2014, it garnered instant attention and critical acclaim, going on to become a major commercial success, for a low-budget indie horror pic. That film was The Babadook—a contemporary genre classic—and after debuting her latest in Venice, the director is in Sundance this week with The Nightingale, which may well see similar results.
In comparison to the terrifying Babadook, a work of pure invention, The Nightingale features fictional characters existing within an all-too-real world. Aisling Franciosi stars as Clare, a young Irish convict who sees terrible violence enacted on herself and her family by a merciless British officer (Sam Claflin). Enlisting the aid of an Aboriginal tracker (Baykali Ganambarr), Clare sets out through the Tasmanian wilderness in pursuit of brutal revenge.
While Kent’s narratives emerge from a place of instinct, the director’s latest was the product of concerns both personal and societal. “It was driven by my response to violence that was in the media. I’d also had some loss in my own life, so I was in a place where I was really looking at, what’s it all about?” Kent explained, sitting down with Franciosi at Deadline’s Sundance Studio. “I wanted to tell a story about light in the darkness, and ask the question, ‘How can we keep qualities like love, compassion, kindness, even in the darkest of times?'”

For Franciosi, the task of portraying Clare felt like a major responsibility because, while her specific character is fictional, violence committed against women is no such thing. So, in concert with Kent, she spent the nine months between landing the part and the start of production doing as much research as she could. “I did my own research, but then also pointed in the right direction by Jen, I would look at PTSD, violence against women, sexual violence, obviously the historical context,” the actress explains. “I met with real victims, I met with social workers who work particularly with women who have been in an abusive relationship—and that, for me, instantly carried so much weight.”

Capturing early 19th century Tasmania for the period genre pic would be a challenge, which led Kent to shoot the film on the remote island state itself. “Of course, we were in civilization as well, but we had to drive out to these remote areas, and it was very grueling, really. There were easier choices that could have been made, but we wouldn’t have ended up with what we have on the screen, which is a world that hasn’t been filmed before,” the director explains. “It’s the first time it’s been in cinema, so we’re really proud of that.”

For more from our conversation with the talents behind The Nightingale, take a look above.