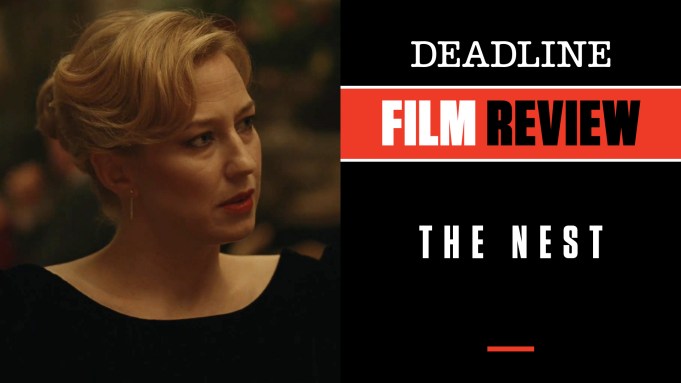 There is a reason The Nest won acclaim at this year’s Sundance Film Festival. It’s good. Really good.

Coming from writer-director Sean Durkin, whose only previous turn behind the camera was nearly a decade ago with 2011’s Martha Marcy May Marlene — a well-regarded debut that still left me at arm’s length in my admiration for it — this long-gestating sophomore effort confirms the promise of a filmmaker who knows how to get under the skin of his characters. He also knows how to write and direct movies for and about grownups in such raw and invigorating fashion that you almost feel like you are watching the John Cassavetes of A Woman Under the Influence or the Ingmar Bergman of Scenes From a Marriage.

OK, so The Nest may not quite be on that level, or even of some of my other all-time favorite movies about marriage like Stanley Donen’s 1967 masterpiece Two For the Road, but still this is a movie that stands out in 2020 for being bracingly original and capable of making audiences genuinely uncomfortable — in a good way. It’s largely English setting makes it feel even a bit gothic, but it is less a horror story than a look at the slow-burning disintegration of a relationship as a couple becomes completely out of sync.

Much of the credit goes to Durkin’s all-too-knowing screenplay, but also to its stars who have never been better. Jude Law plays Rory O’Hara, a British commodities trader who married an American horse trainer, Alison (Carrie Coon). Their life in New York seems idyllic for her, but as we almost learn from the start as we catch Rory on a phone call, not so much him. He feels the lure of his homeland and without consultation finds a cavernous country-style estate outside London for he and his family to move into, including stepdaughter Samantha (a perfect Oona Roche) who is hanging with the wrong crowd, and son Benjamin (Charlie Shotwell) who is being bullied.

Rory is positively giddy showing them around the estate, selling his own dream of being back where he grew up and convinced he is the returning conqueror. The move includes reclaiming a job at his old firm where he clearly thinks he can still be cock of the walk. Conversations with his boss Arthur (Michael Culkin) are telling, and soon we see Rory may be a man out of time a bit, certainly without a moral compass in the greedy mid-1980s in which the film is set. He is as out of touch in his business (though completely in self-denial on that) as he increasingly is in his connection to family and particularly Alison, who is the one who gradually falls apart, extremely unhappy at being uprooted. Rory even ships her prized horse from America, but that goes south when the horse is disoriented in new surroundings and eventually dies.

Alison begins to drift from Rory, exploding in a blistering argument centering on the death of her horse but symbolizing the complete disdain she feels as she distances herself emotionally and physically from her husband. A business dinner in London, brilliantly written and played with biting discomfort, finds her unable to maintain decorum while Rory convinces himself he is landing a major client. A scene on the street following with Rory and work colleague Steve (an excellent Adeel Akhtar) demonstrates just how out of touch he has become. The separate journeys of Rory and Alison back to their home are harrowing.

Law really digs into this role playing all of Rory’s bravado and delusional confidence to the hilt in a memorable performance that stands with his best. Coon gets to play the character who drifts into complete breakdown territory, and it’s terrifying to watch her go down the rabbit hole, particularly in a frightening scene with her deceased horse that is disturbing on every level imaginable. Maybe this is a horror story after all. Maybe not. Both stars are worthy of remembering during awards season. A shout-out as well to Anne Reid, who nails her single scene as Rory’s less-than-welcoming mum.

Check out my video review above with scenes from the film. Do you plan to see The Nest? Let us know what you think.