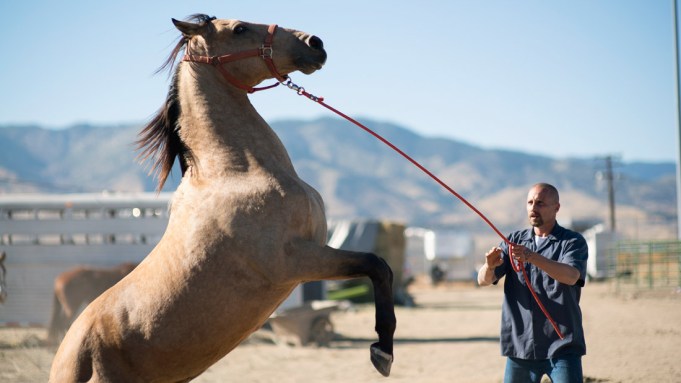 “I was a little bit attracted and very connected and passionate about this mix of poetry and violence,” admits The Mustang’s Laure de Clermont-Tonnerre of the film about a scared convict trying to train a wild horse. “I feel this journey really helped me to grow up,” adds the director of the Focus Features film.

The 2019 Sundance Film Festival debuting picture focuses on the Matthias Schoenaerts’ portrayed Roman and the consequences of the rehabilitation program he enters fresh of out of solitary confinement to learn to train a wild mustang called Marquis. With Bruce Dern and Connie Britton also on board and a helpful hand or two from Robert Redford, The Mustang is the first feature helmed by Sundance Labs vet de Clermont-Tonnerre, who wrote the script with Mona Fastvold and Brock Norman Brock.

The director and Red Sparrow alum Schoenaerts joined me for an Awardsline screening this week of The Mustang in Hollywood and a Q&A afterwards – which you can watch some of in the video above.

“We also had former inmates with us, working with us, who guided us and gave us a lot from their experience,” notes de Clermont-Tonnerre of the research and POV that she sought to capture the Nevada set story. “It felt like we had all those advisors from the prisoners’ side and from the horses’ side to make it as authentic as possible.”

The Mustang is nothing if not authentic, indeed.