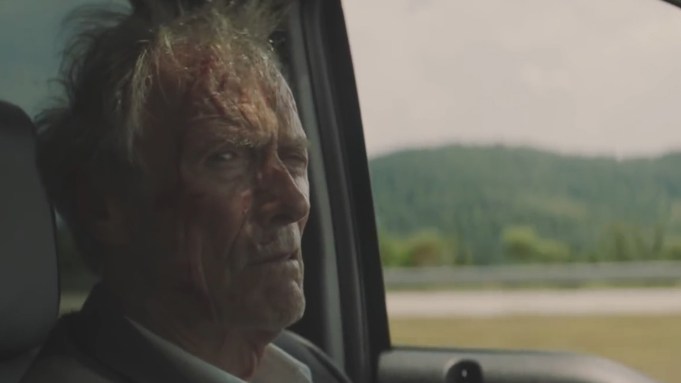 At 88, and with a career that is now in its seventh decade, Clint Eastwood would be justified in slowing down or hanging it up. But just when you think he has done his last performance or final film, he comes right back with another. Now with more than 35 films on his résumé fthat he has directed and produced (including many in which he also starred), Eastwood is back in a major starring role, while again directing and producing.

In The Mule he’s playing a 90-year-old who forged a late-in-life occupation as a drug runner for a Mexican cartel, a script inspired by a true story that first appeared in the New York Times Magazine and is tailor-made for Eastwood’s cool screen persona, even while allowing himself to look old, very old, for the first time I can remember. Nick Schenk, who also wrote 2008’s Gran Torino for Eastwood, has taken the bones of the article and created kind of a flip side of the Torino character. This is a lively guy who still has life to be lived, even as his past mistakes creep up on him. You can see why Eastwood was attracted to it because it is something he hasn’t done before. This is his first acting role since Trouble with the Curve six years ago, and it probably was irresistible to take one more turn in front of the camera when this part came along. That he also is behind the camera makes this a unique entry in movie history. Who else has done all this at his age? The good news is The Mule happens to be one of Eastwood’s best films, performance-wise and movie-wise, the perfect capper to a remarkable career, if that is what it turns out to be.

The ad line for the film says, “Nobody Runs Forever,” and if that isn’t an apt description of the indefatigable Eastwood’s career, it is for his character. Earl Stone, a Marine vet-turned-horticulturalist now on the precipice of 90, realizes he has spent decades putting work above his own family and that it probably is too late to make amends. With his “Daylilies” career behind him, he is strapped for money and faced with foreclosure on his home. His ex-wife (a fine Dianne Wiest) rejects him and blasts him for missing every key moment in the life of his daughter (Alison Eastwood), and now granddaughter (Taissa Farmiga), including their weddings, as well as holidays and his own anniversaries when they were married (among many other things). When the drug cartel spots him and his truck as the perfect cover to move millions of dollars worth of cocaine through Michigan, he takes on the mysterious job as a way to resurrect his life and even make amends by paying for his granddaughter’s wedding.

It was to be a one-time deal: Put a nondescript bag in his trunk, don’t open it, leave the truck with the keys and come back in an hour where an envelope of cash and his keys will be waiting in the glove compartment. It goes so well that he is lured into continuing, despite the stakes being raised each time by the intense members of this cartel. He soon finds out what the cargo he is carrying really is but doesn’t rock the boat. The money is needed. Eventually he is even ushered into the center of that world by the cartel leader (Andy Garcia), who sees Stone as perhaps their most prized mule. After all, who suspects an old guy like this? Meanwhile the FBI is on to this scheme but can’t find the mule as they track the operations of the cartel. The head of the office (Laurence Fishburne) instructs his agents (Bradley Cooper, Michael Pena) to find this guy — a needle in a haystack.

That part of the film ratchets up the suspense nicely, and Eastwood’s direction lets it breathe and play out to the point that we are with him all the way, even in a key scene where he inadvertently finds himself in a diner chatting with Cooper’s character who doesn’t realize this is his prey. Cooper, who starred in Eastwood’s 2014 megahit American Sniper, is just right in this supporting role. The other part of the story revolves around his estranged family and his guilt about his inadequacies as a husband and father. Eastwood masterfully merges the storylines and creates a memorable character to add to his canon, a man who realizes he can’t “run forever.”

In many of his early films, Eastwood was directed by Don Siegel, and this movie feels like one of those collaborations — a film you easily could have seen Siegel directing this star in. In fact, Siegel did John Wayne’s last film, The Shootist, in which he played an aging gunfighter. There are echoes of that in this, even as Eastwood has made his own unique bow to the decisions we make, the regrets we have, the life we lived, the passage of time and all the toll it takes as we face the endgame. The final shots of this film are poignant and memorable, a perfect ending for another fine work from a master of the medium. Warner Bros. releases it Friday.

Producers, along with Eastwood, are Dan Friedkin, Jessica Meier, Tim Moore, Kristina Rivera and Bradley Thomas. Check out my video review by clicking the link above.

Do you plan to see The Mule? Let us know what you think.