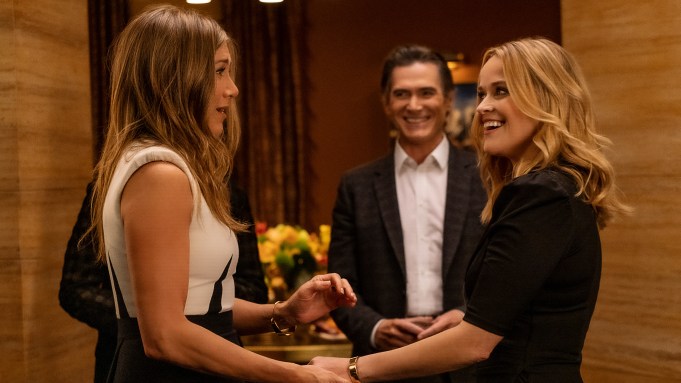 Apple has released The Morning Show‘s long-awaited second season revealing the dramatic reunion of co-anchors Alex Levy (Jennifer Aniston) and Bradly Jackson (Reese Witherspoon) after the explosive events of the finale under the bright lights of the new UBA Network. The 10-episode second season will debut on Sept. 17, on Apple TV+ with the first episode, followed by one new episode weekly, every Friday.

The trailer also reveals the addition of Will Arnett who will portray Alex’s agent Doug Klassen.

New stars joining this season are Greta Lee as Stella Bak, a tech world wunderkind who has joined the UBA executive team; Ruairi O’Connor as Ty Fitzgerald, a smart and charismatic YouTube star; Hasan Minhaj as Eric Nomani, a new member of the Morning Show team; Emmy Award-winner Holland Taylor as Cybil Richards, the savvy chairwoman of the UBA board; Tara Karsian as Gayle Berman, a news producer; Valeria Golino as Paola Lambruschini, a documentary filmmaker; and, Emmy and SAG Award-winner Julianna Margulies as Laura Peterson, a UBA news anchor.

The drama will tackle the coronavirus pandemic during its sophomore turn, but COVID-19 also affected production in real life. It was revealed in July that The Morning Show‘s production company, Always Smiling Productions, filed suit against its insurer, Chubb National Insurance Company, for $44 million in losses from the Covid-19 shutdown and the delay of season 2.

According to the lawsuit, Chubb claimed that it didn’t have an obligation to pay for Covid-related losses because they were not “direct physical loss or damage.” The lawsuit is ongoing.

Watch the trailer for season 2 above.