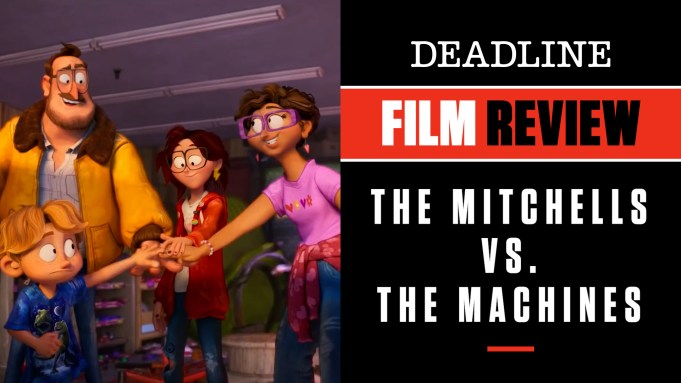 Phil Lord and Chris Miller have found a way to put their unmistakable stamp on the animated feature world with such out-of-the-box fresh hits as Cloudy With a Chance of Meatballs, The Lego Movie, The Lego Batman Movie and their Oscar-winning Spider-Man: Into the Spider-Verse, not to mention pitch-perfect live-action comedies like 21 Jump Street. Seeing their name as producers of The Mitchells vs. the Machines should give you an immediate idea of what to expect, and in terms of sheer frenetic fun they deliver on all cylinders.

Actually they aren’t the credited creative force behind this one. That honor belongs to director Michael Rianda and his co-writer and co-director Jeff Rowe, and they have clearly learned to follow the Lord-Miller template in this Netflix family offering. In fact, this really was planned pre-pandemic as a big Sony theatrical release as it all comes from Sony Pictures Animation and Columbia Pictures (that studio’s iconic logo gets its most recent makeover with a little Mitchell chicanery even before the movie starts), and was sold to Netflix where it should find a welcome audience indeed.

A sly takeoff on how technology may simply be overtaking mankind as we know it is at the center of the plot here revolving around your everyday suburban family the Mitchells. Dad Rick Mitchell (Danny McBride) is a working stiff at odds with his adventurous teen daughter Katie (Abbi Jacobson) who simply wants to go off to college and become a filmmaker, something she does with videos mostly featuring the family dog Monchi (voice by Doug the Pug!) and little brother Aaron (voiced by Rianda) who is obsessed with dinosaurs. She plans to fly off to school, but feeling a bit guilty dear old dad comes up with an idea to turn it into a family road trip where all of them pile in the car to take her there — and that includes goofy but understanding mom Linda (Maya Rudolph) as well.

So off they go only to be interrupted mid-trip by the apocalypse: a gathering of iRobots on a mission to send every human on the planet up into space in separate cubes and take over Earth. This is a prime example of technology finally gaining control, but they didn’t count on the pluckiness of the Mitchells to find a say to survive intact and then try to save the world themselves. They get a little help along the way from a pair of wayward iRobots who have the combined mentality of Beavis and Butt-head, but come in handy. Also we meet PAL (deliciously voiced by Olivia Colman), the discarded faithful iPhone assistant to a tech billionaire (Eric André) who has literally been thrown away in favor of more sophisticated robots to do her job and more. She plots her revenge as the Mitchells find foe after foe in their attempt to avoid the fate of other humans. Among those spectacular set pieces is in a mall where an army of Furbys are set loose, including a giant Furby rivaling the Stay Puft Marshmallow Man in Ghostbusters.

You can probably gather this is all silly stuff, but it is so rapid-fire funny and off the wall that it works. The Lord and Miller formula requires throwing a lot against the wall to see what sticks. Fortunately more than enough gags do, and we are invested in this fully dimensional family fighting the good fight. It has heart and laughs so what more can you ask? Among cameos to watch out for are Conan O’Brien, John Legend and Chrissy Teigen.

It opens in theatres this Friday, and will start streaming April 30 on Netflix.

Check out my video review above with scenes from the film. Do you plan to see The Mitchells vs. the Machines? Let us know what you think.