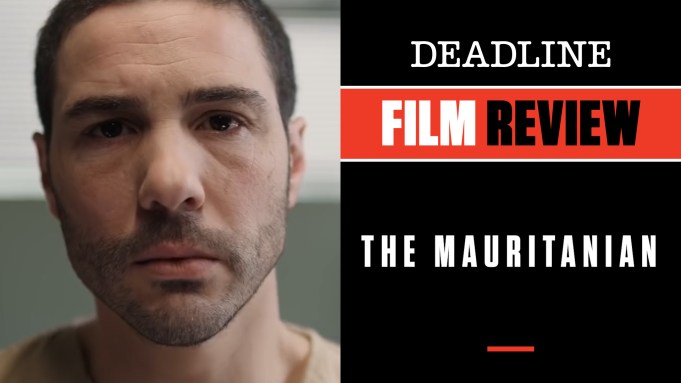 The Mauritanian asks a lot of its audience.

Its central figure, Mohamedou Ould Slahi, spent years locked up at Guantanamo Bay by the U.S. government, accused but never directly convicted or charged of being a terrorist in league with and aiding those who attacked the United States on 9/11, and even confessing to that while enduring unimaginable methods of torture used to elicit a confession. Officials believed he was guilty, and that was enough. He even had a shady past, reportedly once in touch directly with Osama bin Laden and fighting alongside al-Qaida forces (albeit at the time the U.S. was on the same side with them). He maintained his innocence throughout, even writing a book called Guantanamo Diaries and eventually, with the help of lawyers fighting for his freedom, was sprung from a true personal nightmare.

It is a compelling story and one not without controversy, but director Kevin Macdonald — working from a script by Rory Haines, Sohrab Noshirvani, and M.B. Travers (pen name of journalist Michael Bronner) — makes a convincing case for Slahi, helped along by a portrayal of a man not at all the stereotype of a Middle Eastern terrorist but rather one with an affable and engaging personality and a belief that the truth, his truth, would set him free. Whether people are in the mood to buy the story always has been the bane of his existence, but it is indeed a courageous one as presented here, and Macdonald is just the right credible director to do it.

Macdonald, who has a strong background in both Oscar-winning documentaries (One Day in September) and narrative stories of other real life figures (Last King of Scotland), here finds the perfect vehicle to blend both of these specific filmmaking skills to deliver a highly authentic, if slow-burning and a bit too long, account of this man’s quest to escape the stigma of society of find a rebirth in life. The government is as much on trial here as anything, and the facts are laid out convincingly. There can be no doubt of the feelings of the filmmakers, but it is never less than credible and really eye-opening as an indictment on both Republican and Democratic administrations who allowed this kind of treatment that would put an innocent man through hell and locked up in this now-notorious prison for 14 years. It all still reverberates, and this film is a sobering reminder of it all.

Slahi’s plight is well-detailed and pretty horrific, but his spirit is inspiring as his legal eagle attempts to cut through the bureaucracy on his behalf. That is Nancy Hollander, here impressively played with aged makeup by Jodie Foster, who has not had a movie this juicy in a while. She is a dogged legal talent, determined in her goals, but a bit of an odd duck who wears heavy lipstick and loves fast cars. Foster bites into her with abandon, the first real living person the two-time Oscar winner has ever played. Her initial nemesis is Benedict Cumberbatch’s straight-arrow by the numbers prosecutor Lt. Col Stuart Crouch and, credit to Cumberbatch (with a thick Southern accent) that he is not at all one-dimensional here. Shailene Woodley nicely plays Hollander’s junior partner in this investigation, Teri Duncan, herself conflicted and at odds with the public perception of what they are doing, no matter how noble it seems. Really impressive is Tahar Rahim as Slahi, perfectly balancing the complexities of the man and avoiding any of the traps of the kinds of stereotyping we have so often seen in Hollywood films. Rahim broke through in the brilliant A Prophet a few years back and proves just the right choice to make Slahi believable and for us to have empathy for him.

In a divided world, with so many quick to jump to instant judgement on our fellow man, this is first and foremost a story that speaks to our better angels, even when it seems almost impossible to do that. STX Films releases it on February 19. Check out my video review with scenes from the film at the link above.

Do you plan to see The Mauritanian? Let us know what you think.