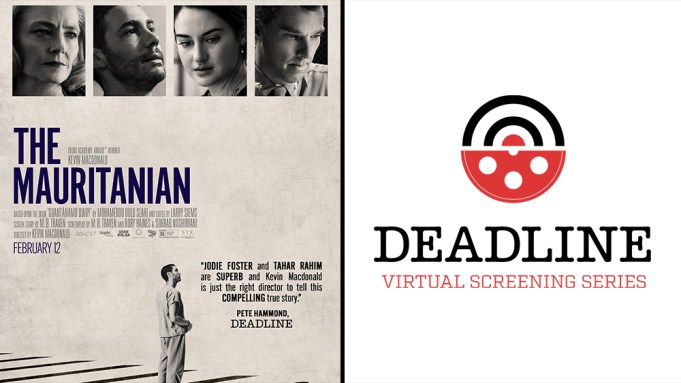 STX Entertainment’s The Mauritanian follows the true story of Mohamedou Ould Slahi, who was unjustly jailed by the U.S. for 14 years in Guantanamo Bay for being a 9/11 plot suspect, and his attorney Nancy Hollander who crusaded against the legal system for his freedom. French actor Tahar Rahim plays Slahi and Jodie Foster is Hollander. Both are respectively nominated at the Golden Globes in the Best Actor Drama and Best Supporting Actress categories.

Oscar-winning filmmaker Kevin Macdonald was turned on to the project by its producer (and eventual co-star) Benedict Cumberbatch. The filmmaker Skyped with Slahi after absorbing his Guantanamo Diary and was struck by his compassion, especially toward the guards who handled him.

In building his performance, Rahim met with Slahi, connecting with him over their Muslim backgrounds; the actor’s family also from nearby Algeria.

Speaking about Slahi’s sense of forgiveness, and current good-natured, upbeat, humorous spirit after going through such torture, and being separated from his family (which continues to this day), Rahim says “He might be a gifted soul. He told me turning anger into forgiveness, it frees your mind and gives you the power to change people. He succeeded with his guards. They turned out to be friends. He didn’t fall into despair at some point.”

Foster, Rami and Macdonald recently joined us for a conversation following the virtual screening of The Mauritanian. Take a look above. The movie recently opened in theaters last weekend and has a Rotten Tomatoes 83% positive score.