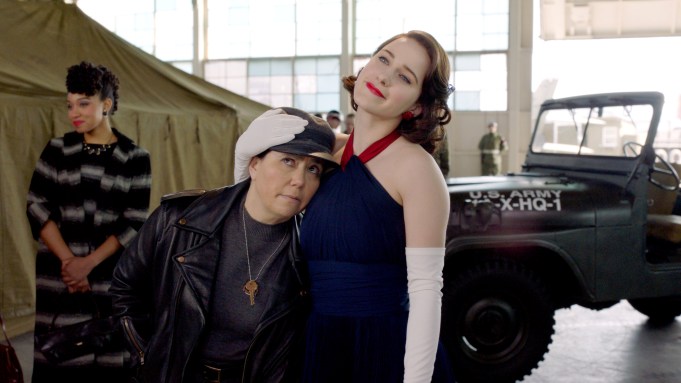 Typically when we see Midge perform stand-up on The Marvelous Mrs. Maisel, we’re in a downtown NYC cellar club, but in the season 3 opener “Strike Up the Band” she lands a big play date at a USO Show, arguably the biggest production number to date for the Amazon Prime series with long tracking shots, synchronized dancers and singers galore.

At a recent Awardsline screening, Amy Sherman-Palladino and Daniel Palladino, the multi-award-winning creators of Mrs. Maisel expounded upon how they pulled it off: Literally over two-to-three days with 850 extras as army guys.

“The ad went out: Have a green shirt? Come on down!” Amy Sherman-Palladino told me.

Part of the reason for the old-fashioned David Lean-esque movie-call stemmed from the husband and wife creators pulling off a long tracking jeep shot, a feat that would be impossible to accomplish with regular VFX ’tiling’ using a small group of extras and then multiplying them in post. Not to mention the 850 strong raised the roof for star Rachel Brosnahan when she performed onstage.

“Rachel fed off the audience,” says Sherman-Palladino, “It didn’t matter how many times they heard the joke, they cheered and they laughed, that’s the reason why it came together so well, is because those guys were there.”

The duo also shed light on how they bring Midge’s stand-up set together along with other Borscht Belters as well in every episode.

“We have writers and some professional stand-ups who are on staff when they are in town…they help punch here and there,” explained Sherman-Palladino.

“This (episode) was a group effort,” explained Daniel Palladino about tapping both stand-ups and series writers for Midge’s zingers. “As she gets into bigger public performances, she’s trying to perform material for the audience.”

“It’s a USO show, she’s not going to go in and curse and do the wrong thing,” he further explained.

In regards to other episodes where Midge takes the mic, Daniel Palladino adds “Something that happened to her, something that makes her angry, we tend to write ourselves. It comes out of character and should sound personal and sound like funny dialogue as opposed to one liners.”