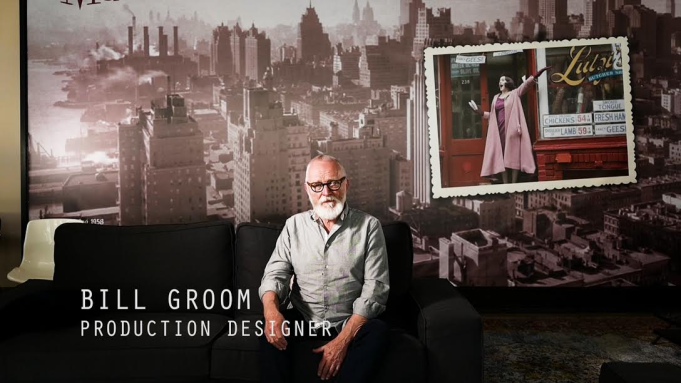 Looking at the résumé of four-time Emmy-winning production designer Bill Groom, one thing is immediately clear: this is an artist who knows New York. Working on Saturday Night Live from the late 1970s through the mid-’80s, and rising up the ranks from assistant scenic designer to art director, Groom has put his stamp on a variety of regarded films (A League of Their Own, Milk), becoming most well known for his contributions to two recent, well-regarded New York-set series—Vinyl and Boardwalk Empire. Now, with Amy Sherman-Palladino’s Golden Globe-winning comedy The Marvelous Mrs. Maisel, the production designer has his hat trick.

One of Hollywood’s favorite subjects for onscreen exploration, New York is never the same twice, as Groom can tell you: Boardwalk Empire‘s Prohibition Era context is a far cry from Vinyl‘s gritty, cocaine-dusted metropolis, where sex, drugs and rock’n’roll reigned supreme. The latest guest on Deadline’s Production Value video series, Groom recently walked us through the sets of The Marvelous Mrs. Maisel out at Brooklyn’s Steiner Studios, giving perspective on the New York of the ’50s that Maisel depicts.

“This was, in many ways, a very orderly period. After World War II, the government made a big campaign to create this image of the American family—the husband, the wife, the kids, the picket fence—in part, to get women out of the workplace once men were coming back from the war,” the production designer told Deadline. “That’s kind of what we see in this show.”

The Marvelous Mrs. Maisel follows Midge Maisel (Golden Globe winner Rachel Brosnahan), a ’50s housewife abandoned by her husband (Michael Zegen) who decides to become a stand-up comic, standing as an affront to society’s expectations of women at the time. Eight years old in 1958—when the series’ first season takes place–Groom had his memory to draw on as a reference point in building Midge’s world from the ground up, then turning to a thorough research process, guided by a specific methodology.

Check out our conversation above and get a look behind the scenes at The Marvelous Mrs. Maisel‘s elaborate sets.