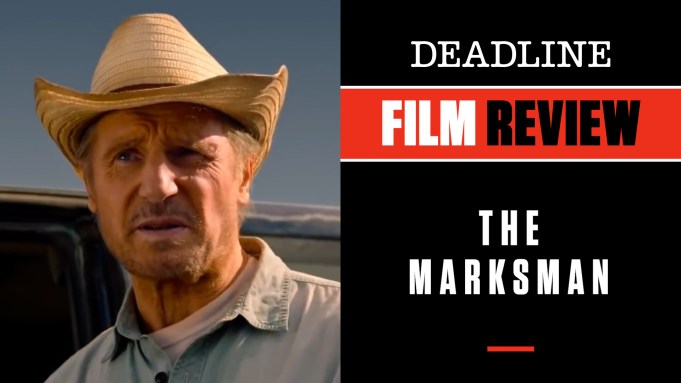 What would we do without Liam Neeson? At 68, this durable actor is my go-to comfort food action star.

In The Marksman, as in his other most recent genre picture, Honest Thief, a by-the-numbers premise with some cardboard bad guys thankfully is balanced by the casting of Neeson, who excels in playing these flawed, infinitely human, basically decent, but don’t-dare-get-in-his-crosshairs kind of loner action hero. In this case, instant sympathy is whipped up with revelation that he is a recent widower and barely hanging on to his home due to being wiped out by his late wife’s medical bills. He is Jim Hanson, an Arizona rancher and Vietnam War veteran who who drives a beat-up pickup truck and has an amazing talent for marksmanship with the long rifle.

The plot is set in motion when he encounters a mother Rosa (Teresa Ruiz) and her young son Miguel (Jacob Perez). Trouble is apparent when she is confronted by the requisite bad guy, Mauricio (an over-the-top Juan Pablo Raba), who is after her because he believes she has the stash of cash her brother stole from Mauricio’s cartel. A confrontation with him and his dopey gang of criminals leads to her death, but also to the death of Mauricio’s brother — the latter at the hands of Jim, who quickly gathers up Miguel and takes off.

After getting Miguel out of the hands of officials at the border, and against the advice of his stepdaughter (Katheryn Winnick), Jim sets out with kid in tow toward Chicago to put the boy in safer hands of relatives who live there. It doesn’t take a brain surgeon to know that Mauricio will not rest until he catches up with his brother’s killer, the orphaned kid and all that money. Everyone is in danger as the chase is on at high speed.

Director Robert Lorenz, who co-wrote the script with Chris Charles and Danny Kravitz, expertly guides Neeson through all the expected action-loaded obstacles, and he allows time for a sweet relationship between Jim and the boy to develop. He’s a guy who has lost it all but now has something to live for, at least temporarily.

The reason these Neeson vehicles of late are so effective, despite being oh-so-predictable, is the star himself, who never ceases to be anything other than completely likable and appealing in a role that he could do in his sleep, at this point. He’s a modern-day Charles Bronson but brings a much-needed human touch to the proceedings that keeps us watching. Perez is a decent kid actor but isn’t all that memorable. There have been a spate of these teamings lately, with loner adult characters and traumatized kids (think News of the World, The Midnight Sky and more), but this one is more standard. Unfortunately the script doesn’t really hit the mark with any distinction, but at least the “marksman” himself does, and that should be more than enough for Neeson’s fans.

Lorenz has worked as a producer on numerous Clint Eastwood films, and you can see the appeal of this material for him since the Jim Hanson role is one we easily could see a younger Eastwood embrace. It isn’t up to the levels expected from that particular icon, but Neeson makes it viable more than it really has a right to work. Like I said, he is my go-to reliable action star of the moment, a guy who puts the Action in AARP.

Producers are Tai Duncan, Warren Goz, Eric Gold, Mark Williams, and Lorenz. Open Road, which also was responsible for Honest Thief, releases it tomorrow. Check out my video review with scenes from the movie at the link above.

Do you plan to see The Marksman? Let us know what you think.