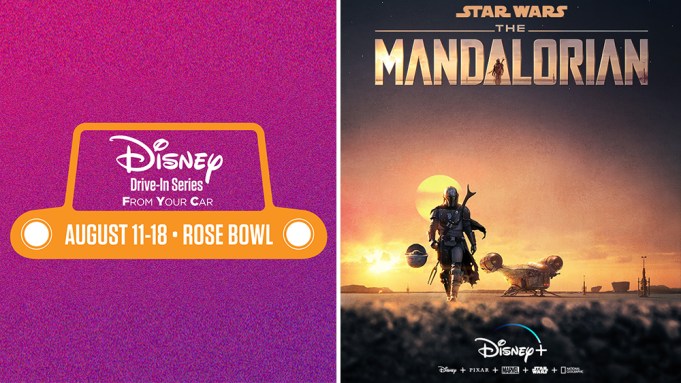 The first live-action TV series coming from the Star Wars universe has broken ground on two fronts this Emmy season. It not only became a breakout success for the first year of the new streaming service Disney+ by earning a whopping 15 nominations including Outstanding Drama Series, but it also overcame Television Academy voters’ general bias in the marquee categories for anything in the science fiction realm, a prejudice often also exhibited by their counterparts in the Motion Picture Academy.

Some were surprised to see the love for this new series so quickly on the Emmy front, but it had an advantage in also being one of the most critically acclaimed new shows of the year. There was no doubt about it at the Disney Drive-In series presented by Deadline that took place last night at the Rose Bowl in Pasadena, where cars packed in to see the first two episodes play on the giant screen, preceded by a conversation I moderated with executive producer/creator Jon Favreau and executive producer/director Dave Filoni, the latter no stranger to Star Wars fans as the creative force behind Star Wars animated hits The Clone Wars and Rebels. Everyone got dinner, a souvenir photo in their car in front of the ‘drive and repeat’ Mandalorian sign, as well as a Baby Yoda (!)  In our chat Favreau explained how it all got started.

“We wanted to really wind it back to the things that inspired the original Star Wars and really get it small in scale and tell simple stories, because part of what you inherit when you’re going to see Star Wars now is this whole history, because the stories have been told for decades, and it was nice, with the new medium, to be able to start with a new set of characters to introduce a new audience,” Favreau, a dedicated fan himself since he was a kid, said of the blueprint for the series. “But we always knew…and this is something I learned from…over at Marvel and working with Kevin Feige, is you always want to keep the core fans in mind, because they have been the ones that’ve been keeping the torch lit for many, many years, but these are also stories for young people and for new audiences. These are myths, and so you always want to have an outstretched hand to people who might not have that background. And so you’re really telling two stories at once. You’re telling the story for the people who are fresh eyes, and you’re telling the story for the people who’ve been there with the property and with the stories and the characters for so many years, and make sure that you’re honoring them, as well.”

As for Filoni, moving into the live-action side of the saga was new but exhilarating. “It’s a shift, for sure, and something that I was interested in for a while. I really got interested in, you know, seeing if I could do it from working with George [Lucas] and listening to his stories and his experience, and from the way he taught me how to, you know, shoot animation, because we were doing it in kind of a virtual sense, as well, with our animation programs that he was creating to tell The Clone Wars,” he said. “So a lot of what Jon was doing when I saw him shooting Jungle Book, but even more so, Lion King, was very relatable to me as far as technique and technology, from what George and I had been doing in Clone Wars. So [Lucasfilm head] Kathy Kennedy and I, we’re always looking for a good bridge for me to try to, you know, change mediums, and this was, to be honest, a very perfect fit and a great environment, and I gained a great mentor and teacher in Jon here to shepherd me through the process of live action.”

To hear more of what their collaboration has wrought, including “building a wall” that became a huge technical achievement in bringing The Mandalorian to life, watch the video above.