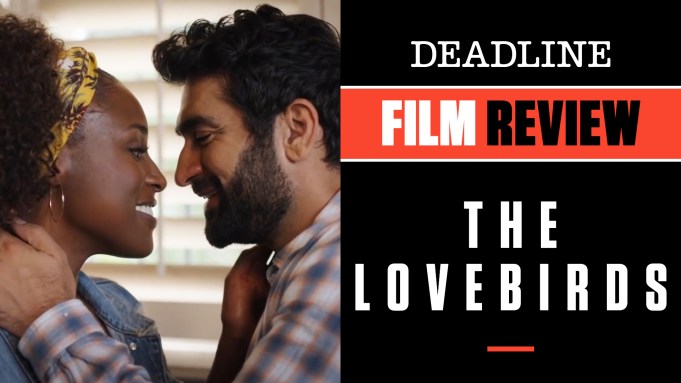 Just before the coronavirus pandemic shut down Hollywood and closed theaters, the Paramount marketing machine was in full gear touting its upcoming release, The Lovebirds. Once it became clear that only a handful of drive-ins would be able to play it, the studio decided to send the film to Netflix, where it begins streaming on Friday. The Paramount logo, rather than Netflix, still appears on the film, and after seeing it, I can see why a quick trip to the streamer was the best option for this uninspired rom-com/murder mystery/action comedy. It is far too thin and derivative to have had much of a box office life.

I was looking forward to this one since it marks a reteaming of director Michael Showalter and his The Big Sick star Kumail Nanjiani, with Insecure’s wonderful Issa Rae added to the package. How could it go wrong? Let me count the ways.

Nanjiani co-wrote and got an Original Screenplay Oscar nomination for Big Sick, one of the best comedies of recent years, but unfortunately he didn’t write this one. Aaron Abrams and Brendan Gall are credited with the over-the-top script, which deals with Jibran (Nanjiani) and Leilani (Rae), who are four years into a relationship in which they seem to be constantly at odds, bickering back and forth and generally getting on each other’s nerves. Things intensify when a body suddenly smashes down on their car’s windshield. Jumping out to help, they find it is a bloodied bicycle messenger who ignores them and instead rides off in a hurry. Another guy, saying he is a cop trying to track down the bicyclist, jumps in their car and takes off on a pursuit with Jibran and Leilani along for the ride.

It becomes immediately clear there is more to this than meets the eye and — bingo! — our intrepid couple find themselves knee deep in a murder mystery in which they think they are going to be suspects. Instead of reasonably going to the authorities, they dive head-first into the underworld, landing in surreal and dangerous situations along the way. The comic violence and action scenes make little sense and seem dropped in just because that is what you do in these kinds of films.

Nanjiani unfortunately was stuck in a similarly out-of-control flick last summer with the dreadful Stuber, in which he played an Uber driver dragged into circumstances beyond his control, just as he and Rae are in this thing.

Among the ludicrous setups is one where the pair are tied up and forced to choose which torture they would prefer — hot bacon grease poured on their head or what is behind the barn door — in a bit played like a wicked episode of Let’s Make a Deal. Poor Anna Camp is done no favors by the script in her big scene here. Worst of all, though, is a truly weird section where the pair go undercover to a sex party in which all in the cult-like audience must wear bird masks as a select group of them take part in an orgy onstage. Don’t ask. If you try to make sense of any of this, you should just stop and move on to The Wrong Missy instead, a much funnier Netflix offering starring David Spade that I reviewed last week; it knows how to get laughs that stick even in the most absurd moments.

This is all a shame because Nanjiani and Rae are such skilled performers, and the diversity of this casting without ever bringing attention to itself is admirable. Both try valiantly to rise above the generally lowbrow shenanigans, which thankfully are kept to a running time under 90 minutes. The laughs to be had here are solely because of their natural wit and ability to deliver rat-a-tat wordplay against each other, with some lines that I am convinced do land because Nanjiani and Rae clearly improvise them. One bit toward the end, when they are in deep peril on a boat with the bad guy, is genuinely funny, a rare moment when you can see what might have sold this premise in the first place. Instead, for the most part The Lovebirds just flaps its wings without ever taking off.

Check out my video review with scenes from the film at the link above.

Do you plan to see The Lovebirds? Let us know what you think.