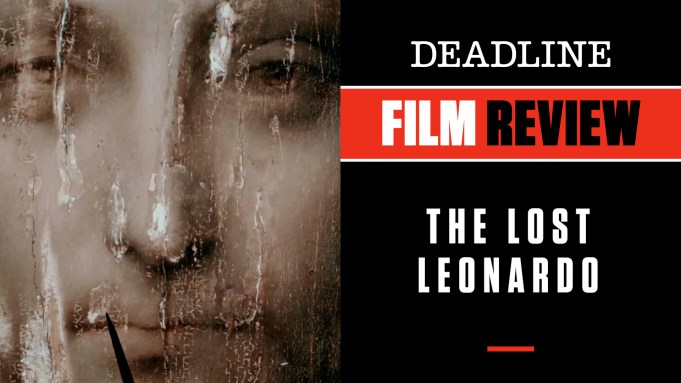 Is it a fake or is it real? That is just one of the intriguing questions posed in The Lost Leonardo, a fascinating and riveting new documentary that tells the tale of the painting known as the Salvator Mundi (The Savior of the World), commissioned circa 1500 and reputedly painted by da Vinci. It first surfaced in 1900, bought at a shady New Orleans auction for $1,175 in 2005 and later sold at a Christie’s auction for $450 million, a record sum for any painting.

The new film, which took director Andreas Koefoed years to bring to the screen, has that painting and its restoration at its center, but also seeks to pierce the underbelly of the art world: the agendas of its dealers and institutions and the truths behind what could be the first true discovery of a da Vinci in over a century. Or not.

It is a complicated puzzle Koefoed attempts to put together through a series of interviews with experts, critics, dealers and, perhaps most important, Dianne Modestini, who began in 2005 restoring this badly damaged work of art she firmly believes was from the hand of Leonardo.

It all plays out like a spy novel, with many figures and countries weaving in and out of the story of the Salvator Mundi on its journey to its current home in the Middle East. The New York Times reported the work is believed to be in the hands of the notorious Crown Prince of Saudi Arabia, Mohammad bin Salman (aka MBS), locked up somewhere out of sight and caught in the middle of a global game of politics.

Koefoed was rebuffed by such heavy hitters as the National Gallery, which first displayed the painting as an “autograph” (the work of a single person) da Vinci in 2011 without regard for the opinions of art experts; Christie’s, which auctioned it off as the real deal; the Louvre, which desperately tried to show it in its da Vinci exhibition; and the governments of France, Saudi Arabia and other entities. None would speak with him for the film.

Instead, the filmmaker put together a cast of characters here rivaling anything John Le Carré could ever dream of. Most importantly he has Modestini speaking extensively on the record along with “sleeper hunters,” curators, businessmen, dealers, critics, financiers, da Vinci experts, restorers, investigative journalists, professors, the CIA, the FBI and more. Most colorful is the highly skeptical critic/writer Jerry Saltz, who calls it all “a telling fable of our time.”

One of the most interesting sections revolves around Yves Bouvier, a wheeler dealer who bought the Mundi for $83 million and then underhandedly turned around and sold it to a Russian businessman the next day for $127 million. Bouvier is surprisingly open about his questionable business tactics which since have landed him in major legal jeopardy. That Koefoed got him to be so forthcoming is impressive, but so is the patchwork quilt of participants he has put together to tell the story of a painting that has been restored for all the world to see — unfortunately only in showcases like this one for now. When and where it might surface again for public viewing is another question Koefoed can’t answer.

Particularly poignant and telling is the interview with Modestini, who was still grieving the loss of her restorer husband Mario when she began her work on the Salvator Mundi in 2005, using it as much to prove the discovery of a masterwork from the Renaissance as it is to channel her grief. Her contributions to the mystery are captivating to hear, and the fact is that if the Salvator Mundi is not a lovingly restored da Vinci as she believes it to be, then the buyer, for all intent and purposes, has a $450 million artwork largely from the brushstrokes of Dianne Modestini.

In the end, The Lost Leonardo isn’t so much a story of one painting but rather all the disparate personalities drawn to it for their own purposes, regardless of where the truth may lie. Some are powerful, some want the power that comes with it, and some are believers in the power of art. What Koefoed has achieved is an engrossing film with many moving parts and personalities. It tells a tale that continues to unfold beyond the end credits — where ultimately the truth might just lie in the eyes of the beholder.

Sony Pictures Classics releases the film Friday in theaters. Check out my video review with scenes from the movie at the link above.

Do you plan to see The Lost Leonardo? Let us know what you think.