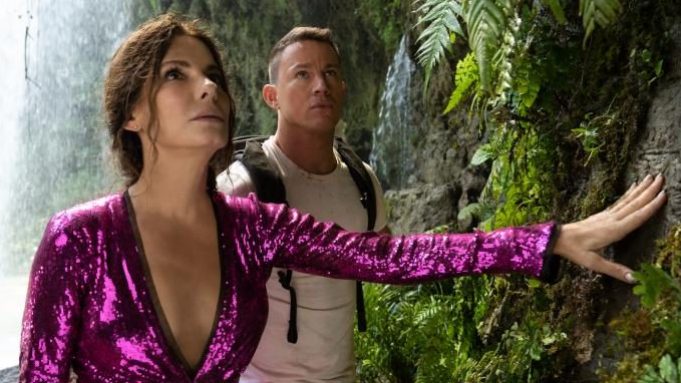 This week, Paramount Pictures unveiled the first trailer for The Lost City, a romantic comedy starring Sandra Bullock and Channing Tatum, which is set for release on March 25.

The Paramount feature formerly titled The Lost City of D is said to be in the vein of Robert Zemeckis’ classic Romancing the Stone, starring Michael Douglas and Kathleen Turner. It follows reclusive romance novelist Loretta Sage (Bullock) as she embarks on a book tour with her cover model Alan (Tatum), watching as the pair get swept up in a kidnapping attempt that lands them in a cutthroat jungle adventure.

In the trailer, we’re introduced to Fairfax, a wealthy character played by Daniel Radcliffe who is a fan of Sage’s books, and is convinced that she can help him find the treasure at the center of her latest (fictional) work.

“I have to respectfully decline,” Sage says, to which Fairfax responds, “I’m afraid I must insist.”

Following Sage’s kidnapping, Alan declares that he’s going to be the one to rescue her—to prove to the author that he is more than a mere cover model.

But “this is not a romance novel,” she warns. “Jungles eat people like us.”

Later, we’re introduced to another unnamed character played by Brad Pitt, who is likewise set on rescuing her.

“Why are you so handsome?” Sage asks Pitt’s character when he swoops in to save her. “My dad was a weatherman,” he deadpans in response.

Aaron and Adam Nee wrote the script for The Lost City, based on a draft by Dana Fox and Oren Uziel, and directed the film, which also stars Patti Harrison, Oscar Nunez and Da’Vine Joy Randolph. Bullock produced via her Fortis Films along with Liza Chasin of 3dot Productions and Exhibit A’s Seth Gordon.