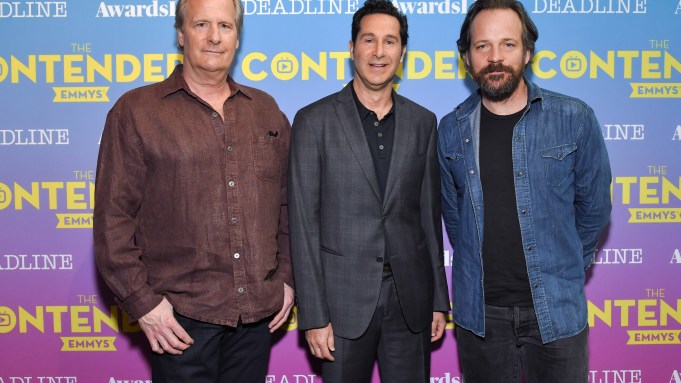 The rising threat of Osama bin Laden and al-Qaida was known to the FBI and the CIA in the late 1990s. But rivalry between the agencies kept their accumulated information in silos, ultimately leading to the breakdowns that helped result in the September 11, 2001 terror attacks and the war in Afghanistan.

The Looming Tower, the 10-episode Hulu miniseries based on the Pulitzer Prize-winning book by Lawrence Wright, examines the actions of two separate counter-terrorism squads of agents from the CIA and FBI. The focus as they travel around the world is their internecine fight over information, a battle which ultimately led to disaster.

At Deadline’s The Contenders Emmys, some of the participants marveled at pulling off such a sweeping, history-based drama.

“There was a lot of information” to sort through in Wright’s book, said Craig Zisk, who directed three episodes of the miniseries. “It was all about what we were going to keep in.”

Jeff Daniels, whose role as FBI special agent John O’Neill looms over the series, marveled at how 9/11 already seems like ancient history to some younger people. He noted that when you discover the backstory behind the attacks, the reaction is, “You’re kidding me.” Then, “You immediately go to, can it happen today?”

Peter Sarsgaard, who plays Martin Schmidt, the CIA counterpart to O’Neill, added, “You really have to read the book.” As one of its readers, “I felt a great deal of anger,” he said. “But if you get into it, it made sense to me why I would protect information.”