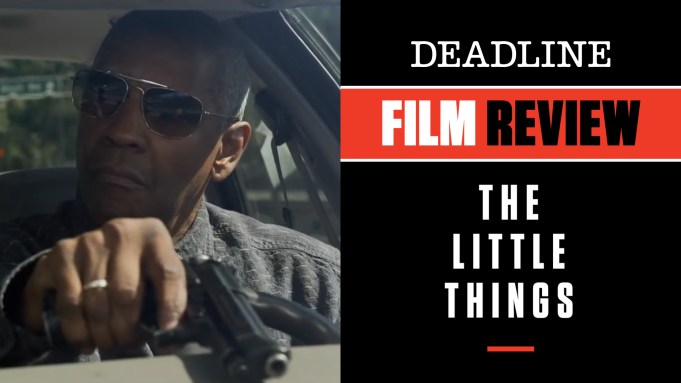 It may have taken nearly three decades to finally reach the screen, but the wait has been well worth it for writer-director John Lee Hancock’s brilliantly realized and complex thriller, The Little Things. And no, that is not a typo. Hancock wrote this film in the early ’90s — a different age in terms of technology in tackling the type of case the film explores — so now, instead of being a contemporary story, it comes to us as a period piece. Around the time Hancock wrote his script, another movie dealing with a notorious serial killer, The Silence of the Lambs, was sweeping the Academy Awards. This is the best I have seen in this genre since then, maybe ever. Credit Hancock and producer Mark Johnson for their tenacity in sticking it out. The Little Things is a major motion picture achievement, an extraordinary thriller this is as unexpected as it is accomplished.

Another benefit of waiting this long is how it finally was cast. Three Oscar winners — Denzel Washington, Rami Malek and Jared Leto — turn in performances at the top of their game and rank among their finest, and that obviously is saying something. Washington, fitting into this role like a reliable old shoe, plays Joe Deacon aka Deke, a veteran Kern City Sheriff’s deputy who is called up to Los Angeles to do some brief work on a case. It turns into a much more complicated assignment when he meets L.A. Sheriff’s Department Deputy Sgt. Jim Baxter (Malek), who believes he can be just the right person to help in a baffling search for a serial killer terrorizing the area. Their teaming is not one out of the book but is intriguing for many reasons, not the least of which is an incident out of Deke’s past that comes into play as they get closer to their target.

That target — the key suspect, as it develops — is Albert Sparma (Leto), who certainly looks the part of a creepy killer also is not quite what you might think. In interactions with Sparma, they find he is much harder to pin down, a crafty guy who revels in playing cat-and-mouse games with these detectives. The result is that the viewer is kept guessing throughout. Do they really have the right guy? In the case of Baxter,, the head trips the case is causing take him in places not ordinarily seen in this genre. Bottom line: All three of these characters are out of the norm, fully three-dimensional and never go in predictable directions.

Washington is simply superb as someone who does his job by looking for the “little things” but deals with actions from many years before. Malek finds a worthy follow-up to his Oscar win a couple of years ago, with a portrait of a man who might be losing a grip on what he always thought he knew. He is excellent. And Leto nails another great role, throwing himself into Sparma hook line and sinker. He takes what could have been a stereotype and makes him unforgettable — alternately funny, frightening, intelligent and puzzling.

A fourth main character is the city of Los Angeles itself. Hancock has found a sensational way into the underbelly of the city, perhaps the most photographed ever in movies, and shows us an L.A. we never have seen. Location choices are spot-on, as are all the production values of this superb-looking film shot by cinematographer John Schwartzman, with excellent production design by Michael Corenbrith and a haunting score from the great composer Thomas Newman. With films including The Rookie, The Alamo, Saving Mr. Banks, The Founder, The Highwaymen and The Blind Side, Hancock has seemed to drift toward true stories for films he directs. The Little Things may be fiction, but it feels just as authentic as anything he has taken from real life.

Warner Bros releases the film in theaters on Friday as well as streaming on HBO Max. Check out my video review with scenes from the film by clicking the link above.

Do you plan to see The Little Things? Let us know what you think.