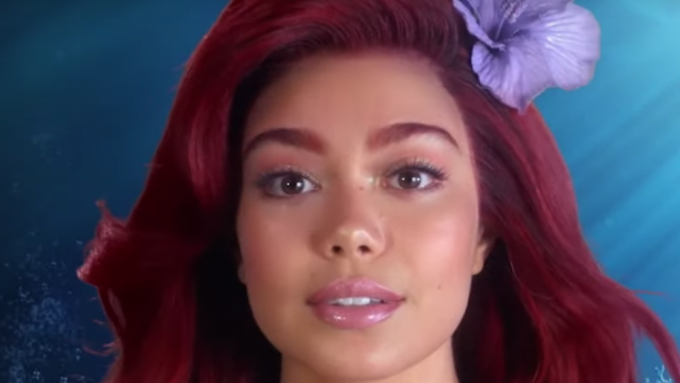 ABC went “Under the Sea” on Sunday night as they gave us the first look at the cast of The Wonderful World of Disney presents The Little Mermaid Live! with a promo during Kids Say the Darndest Things.

Set to the tune of Ariel’s lyrical signature, the 30-second spot gives us a glimpse of Auli’i Cravalho as the titular singing mermaid, Queen Latifah as the villainous Ursula, Shaggy as the friendly crab Sebastian, Graham Phillips as the handsome Prince Eric and John Stamos as the mustachioed “les poisson”-obsessed Chef Louis.

The new special is a tribute to the original 1989 animated classic and its memorable music. The live musical will feature performances by its star-studded cast interwoven into the broadcast of the original feature film. The hybrid format will combine intricate sets and costumes created for the special with music from the original animated film and the Tony Award-winning Broadway stage version, composed by eight-time Oscar-winner Alan Menken. Howard Ashman’s film lyrics will also be showcased, with Glenn Slater, lyricist for the Broadway adaptation, as a contributor. Also joining the creative team are choreographers Nick and RJ Durrell, who recently completed work on P!nk’s The Beautiful Trauma World Tour.

The Wonderful World of Disney presents The Little Mermaid Live! is produced by Done+Dusted. Executive producers include Done+Dusted’s Hamish Hamilton, who will also direct, Katy Mullan, David Jammy, Raj Kapoor and Ian Stewart. Also executive producing is Richard Kraft, producer and director of the acclaimed Hollywood Bowl productions of The Little Mermaid and Beauty and the Beast.