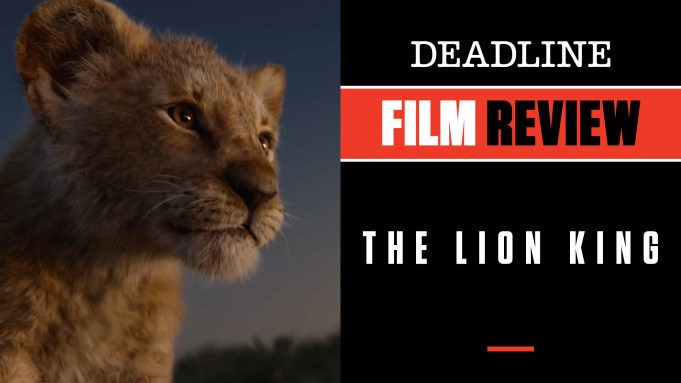 On top of the 1994 animated masterpiece and then a Tony-winning 1997 musical that’s still running (the third-longest in Broadway history, with no end in sight), the new reinvention of The Lion King as a “live action” movie has a lot to live up to. That’s an understatement, but as a completely faithful remake, Disney and director Jon Favreau know not to mess with something that works. This is no revisionist version but nevertheless one that will likely knock you out for its vision.

That vision is to serve his majesty, the Lion King, with what can only be described as a dazzling ode to the wonders of cinematic technology. It is a misnomer to say this is a “live action” movie. It isn’t. With the exception of one shot, it is completely animated — just like the 1994 film — except using a photorealistic approach that might make this edition a more appropriate release under the Disneynature label. You can call it animated, but this thing looks like one of those wildlife documentaries Disney releases every Earth Day. I can barely tell the difference, and that is the key achievement of this Lion King 2.0.

What Favreau did in his remarkable live-action reboot of The Jungle Book, with its Oscar winning special effects, has been enhanced tenfold here using remarkably advanced animation technology to focus on a world with no human in sight. There are other differences here. It is rated PG rather than G, due to the sheer intensity of the battles, and particularly the death of Mufasa, a sequence so heart-wrenching that anyone with a sensitivity to animal violence should think twice about keeping their eyes open when it plays. It’s also two hours, rather than the sprightly 88 minutes, though the added time wasn’t noticeable to me largely because my mouth was agape at the sheer wonder of the visuals, even if they are essentially aping the original. The new voice cast is predominately African-Americans, which not only enhances the end result, it is the right authentic choice here.

You all know the story. Mufasa (voiced magnificently again by 88-year-old James Earl Jones) rules over the Pride, teaching his young son Simba, the royal heir to his throne, all the tricks of the trade. But Mufasa’s jealous and evil brother Scar (Chiwetel Ejiofor, excellent) is determined to kill them both so he can take what he sees as his rightful place as king. He has a plan to run the place into the ground with the help of his loyal, vicious-looking hyenas. Meanwhile, after Mufasa’s fate is sealed, Simba grows up with the help of warthog Pumbaa (Seth Rogen) and meerkat buddy Timon (Billy Eichner), who steal the show. Not only do they do the showstopping “Hakuna Matata” justice, Rogen and Eichner seem to have thrown out Jeff Nathanson’s updated script and decided to do their own routine. It works brilliantly and lifts the movie the minute they come onscreen.

As the young and older Simbas, JD McCrary and then Donald Glover do justice to the iconic role, as does Beyoncé Knowles-Carter as Simba’s BFF Nala. Glover and Beyoncé do a soaring new version of Elton John and Tim Rice’s “Can You Feel the Love Tonight?” There’s also fine voice work, if not enough, from Alfre Woodard as Sarabi and John Oliver as Zazu, among a terrific large cast.

A big shout-out to the cinematography of Caleb Deschanel and, of course, to Hans Zimmer, who does a new take on his Oscar-winning score from the 1994 film. There’s a new Beyoncé song midway called “Spirit” and a new tune from Sir Elton thrown over the end credits, but neither compares to the originals – all of which thankfully on display again. The opening “Circle of Life” sequence is still effective, and the Lion King story still packs an emotional punch no matter how many times you’ve seen it, or in how many iterations.

Producers are Favreau, Jeffrey Silver and Karen Gilchrist. Disney opens the film in China this weekend and goes domestic on July 19. Check out my video review above, which includes scenes from the movie.

Do you plan to see The Lion King? Let us know what you think.