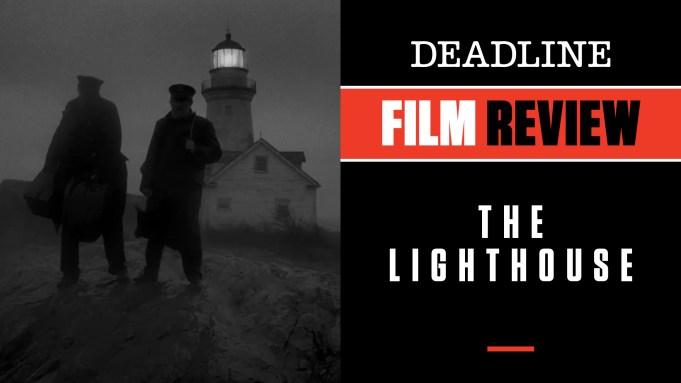 With just two feature films to his credit as a director, Robert Eggers proves himself to be a master of mood, atmosphere and psychological horror. First came 2015’s acclaimed 17th century-set gothic tale The Witch, and now get ready for The Lighthouse, yet another brooding period thriller unlike anything anyone else is really doing right now onscreen.

Gorgeously filmed in black and white by gifted cinematographer Jarin Blaschke, this two-hander shot on 35MM in a square aspect ratio used mostly for films of the 1920s and ’30s allows Eggers to create a modern horror picture that is free from all the recent tropes of the genre but creeps up so unexpectedly that you won’t know what hit you. A truly twisted, weird movie, it also happens to serve as a great vehicle for the talents of its two stars, Robert Pattinson and Willem Dafoe, who both throw themselves full throttle into the roles of 1890s lightkeepers in a stormy and uninviting Maine.

The idea is they are banded together for a monthlong gig on an isolated island, in charge of its most distinct landmark, a lighthouse. Pattinson plays Ephraim Winslow, a somewhat mysterious young man of few words who is a newbie in this particular trade and taken under the wing of veteran Thomas Wake, played with sea-salt relish by Dafoe, who brilliantly captures the flavor of a guy who has spent too much time alone in lighthouses. He is very protective of this one and, despite Ephraim’s desire to take a turn at guarding the top tier of the structure where the light actually beams, won’t let his cohort near it — a denial of duty that begins Ephraim’s obsessive descent into madness.

Much of the film’s script (the filmmaker’s brother Max Eggers is a co-writer) is taken up defining the odd relationship between the pair as Thomas gives Ephraim mundane cleaning duties and other less exciting stuff to do while he controls the light. Their conversations in a particular dialect common to this period, and even lifted from the works of authors of the time such as Herman Melville and Robert Louis Stevenson, are amusing until it goes too far, when Thomas reveals secrets from his past. Their suspicions about each other ramp up and offer both stars the chance to show off their considerable skills, even if Dafoe has the showiest lines.

Meanwhile, Ephraim has recurring problems with the location, bothered by a persistent seagull to the point I thought this might turn into a distant cousin of Hitchcock’s The Birds at any moment. Despite warnings from Thomas about the price to pay for killing a bird, he clearly has had enough. His obsessions with objects that wash up, like a sexual encounter with a clay mermaid, add to his increasing madness, born from isolation and perhaps his own demons. All of this is not so much plot-driven as it is a real minimalist character study that is fascinating to absorb.

Movies about man against the elements come to mind in watching The Lighthouse — such as Moby Dick and The Old Man and the Sea, and as their time on the island increases, so does the toll on their psyches, particularly Ephraim, and especially when the inevitable storms and thundering waves crash into their lives. It is only a matter of time before it all goes haywire.

With great help from the meticulous production design of Craig Lathrop and a brooding musical score by Mark Korven, both Dafoe and Pattinson are at the top of their game and play this for all it’s worth. Eggers knows how to take this all slowly to a boiling point and if you are patient, the rewards are many. A24 puts it in limited release today. Check out my video review at the link above with scenes from the movie.

Do you plan to see The Lighthouse? Let us know what you think.

How Robert Eggers Built ‘The Lighthouse’ – The Contenders London