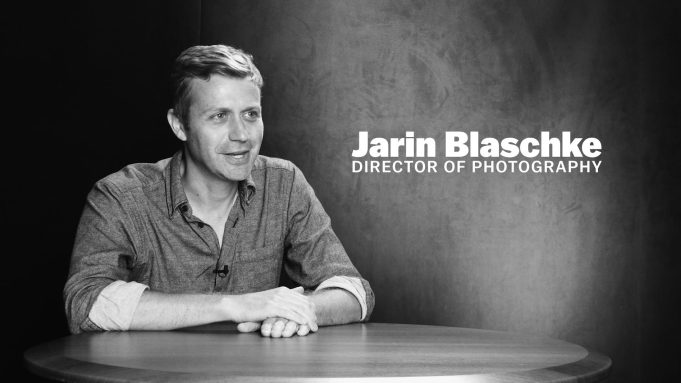 When Robert Eggers approached cinematographer Jarin Blaschke with The Lighthouse, he had a quite specific vision for how this riotous psychological thriller would look and feel. “It is briny. It feels old and crusty. The term he used was, ‘It’s black and white, with a cherry on top,’” the DP explains. “All I could think that that meant was, it’s just a classical, shot for black and white, high contrast, old school [film].”

Starring Robert Pattinson and Willem Dafoe, the gorgeously lensed two-hander charts the descent into madness of two lighthouse keepers, secluded on a remote and mysterious island off the coast of New England. Shot on 35mm black-and-white film, with vintage Baltar lenses and a square aspect ratio, the pic was artfully crafted to transport viewers back to the end of the 19th century.

A frequent collaborator of Eggers’, going back to early short films like The Tell-Tale Heart (2008), Blaschke engaged in a dynamic back-and-forth with the director over a prolonged period, sifting through myriad photographic references, as the pair refined a palette for the film.

“We had years for it to percolate, so it just kind of sits there, and you get ideas like, ‘What kind of black-and-white is it?’ I’m thinking of stuff, he’s thinking of stuff, and creatively, there is a lot of crossover,” the DP told Deadline, in the first installment of the Production Value video series for Oscars 2020.

One of the key ideas Blaschke hit upon, that felt spot-on for The Lighthouse, was the notion of emulating the look and feel of orthochromatic film. “[Eggers was] like, ‘Well, what is that?’” Blaschke recalled.

“‘It should feel like this kind of photograph—like the skies are blown out, and the skin is craggy, and it’s really hazy,’” the DP replied. “That’s why [the final film] looks that certain way.”

In terms of light sources for The Lighthouse, the most important of all was the gigantic Fresnel lens sitting atop the structure—fabricated for the film, based on the Fresnel sitting in a real lighthouse in Point Cabrillo, that Eggers and Blaschke discovered on a trip up the California coast. While production designer Craig Lathrop oversaw the light’s construction, alongside Lens Preservationist Dan Spinella and U.S. Coast Guard Lampist Kurt Fosburg, Blaschke again played a critical role for the production, advising on the quality and quantity of light required for cinematic purposes.

“When we visited the lighthouse in Northern California, that would have been built for an oil flame, or a low-wattage incandescent bulb. I think there’s like a 75-watt bulb in there. But for us, shooting at this light level, you need to catch atmosphere in the air, and all this stuff. We put a 6,000-watt HMI bulb in there, which comparatively obliterates anything that the real lighthouse would have had,” Blaschke explains. “Quality of light is paramount, but then quantity became an issue, too. So, it’s trying to find the compromise between the two.”

Working with a seagull unit and enduring the extreme weather conditions of Nova Scotia in the making of The Lighthouse, Blaschke was most challenged during the shoot in figuring out how to light for black-and-white. Written into the script, along with a mention of the film’s “boxy aspect ratio,” the notion of shooting on film was essential to Eggers’ vision of the project, giving the movie remarkable texture. At the same time, hitting the right light levels for every scene was difficult, while working with old lenses. “You can’t use [them] wide open—you’ve got to stop [the aperture] down a bit. Otherwise, it’s like smear city,” the cinematographer says. “So, you need a certain aperture. [And] you’ve got black-and-white film, which has a tenth of the sensitivity of a modern digital camera. So, everything had to be lit.”

For Blaschke, on The Lighthouse and every other project, the joy of his work is figuring out “the tangible part of making make-believe.”

“I guess it’s magic, right? You have something that doesn’t exist, and then you have to figure out how to make it,” he reflects. “I guess that’s also what’s satisfying about shooting film, because it’s actually a physical thing. It actually exists, this thing you invented—here it is.”

For more from our conversation with the DP behind the A24 title, click on the video above.