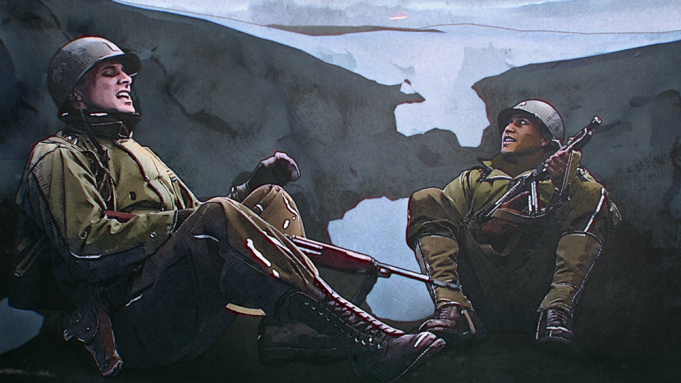 Netflix’s WWII animated series, from Jeb Stuart and A+E Studios, will land this Veteran’s Day, Nov. 11. The Liberator, based on the book The Liberator: One World War II Soldier’s 500-Day Odyssey by Alex Kershaw, follows a young military captain as he returns to the battle field after an encounter with enemy forces nearly kills him.

Captain Felix Sparks, played by Bradley James, kicks of the trailer writing to a loved one.

“My dearest Mary, when I left you to come over here, I was scared of losing you, scared of not coming back, scared of dying,” Felix reads. “But I began this war with a group of men, men who I owed a debt to.”

The trailer sees James’ Felix take a shot to the chest, which leaves him out of service temporarily. But reluctant to let his men die, Felix, still badly wounded, goes against his doctors’ orders and returns to fight alongside his fellow soldiers.

“Mary, I don’t expect you to understand, but it isn’t’ my time to come home yet,” Felix continues. “I’m not scared anymore.”

The Liberator trailer offers viewers a sneak peek at the animated recreations of WWII fights, such as those taking place throughout snowy Germany to the 1944 storming of Normandy. Over a swelling score, Felix reflects on the generations of fighters combatting the Axis powers and the camaraderie he shares with his men.

“My darling Mary, if ever for the rest of my life, I go silent or seem to leave you even when you’re right beside me, you’ll know where I am,” he says.