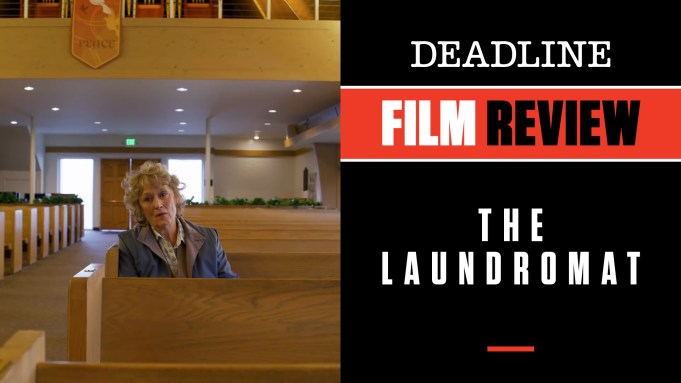 There can be no doubt the new satirical take on the 2015 Panama Papers scandal, The Laundromat, offers a story well worth telling. It points out the obvious in today’s America: the little guy is screwed, while the top 1% make all the money, know how to “launder” it, and pay no taxes.  The light approach by director Steven Soderbergh and his screenwriters Scott Z. Burns and Jake Bernstein works well at times, but mostly the movie comes off as uneven.

In recent years, Adam McKay has dealt with similar complex financial and political material in the likes of The Big Short and Vice, taking serious issues and making them funny and palatable for audiences who may not be able to handle the dense complexity of it all. I was hoping for similar results here considering the pedigree of these filmmakers: Soderbergh is a brilliant director whose films include landmarks like Erin Brockovich and Traffic, as well as three he did with writer Burns including The Informant, Contagion, and Side Effects. All gave lots of food for thought, as does The Laundromat, but too often this one gets stuck in a smug storytelling style that buries the more important aspects of what it ultimately is trying to say. Great satire is a tricky thing, and tonally this film has issues. I kept wondering what Billy Wilder might have done with similar material.

However, it does have a great cast that delivers the best it can, and at the top of that list is Meryl Streep, terrific as Ellen Martin, an average American wife and mother whose anniversary trip turns into a disaster when the sightseeing boat she is on with her husband (James Cromwell) overturns, killing him and 20 others. This thrusts her into a world for which she has no preparation: getting an insurance settlement. It turns out the owners of the sightseeing boat (Robert Patrick, David Schwimmer) had no idea the insurance they had was bogus and that they had been taken in by a shell company run by a guy (Jeffrey Wright) in prison. What should have been a significant amount of money for Ellen turns out to be a pittance, and the dream Las Vegas high-rise condo she planned to retire to is bought out from under her by Russian oligarchs (Sharon Stone plays the real estate agent delivering the bad news in a great scene). This sets Ellen off on a fruitless journey to right some wrongs and get to the bottom of the fact she is screwed.

This section is compelling stuff, and Streep is terrific as usual, adopting a frumpy but sweet look. But the movie leaves it behind to go to other segments and examples of the way the wealthy have it all over us including an amusing section involving a very rich man named Charles (nicely played by Nonso Anozie) who tries to pay off his own daughter when caught having sex with her young friend, and then a sequence in China with a shady salesman (Matthias Schoenaerts) whose “mark” (a cool Rosalind Chao) turns the table on him in deadly ways.

It is hard to hold an audience when the narrative hops, skips and jumps all over the place, despite the individual merits of the sequences. Thus Soderbergh and Burns use the device of inviting the two real-life lawyers (played by Antonio Banderas and Gary Oldman) at the center of the scandal to be our guides as they act as a kind of a recurring Greek chorus trying to explain in their very suave fashion just how all these offshore accounts work in favor of the rich, and against the little guy. Their act gets a little coy but serves to glue the pieces of the screenplay together for us, and both actors are game as far as it goes. In real life. Roman Fonseca and Jurgen Mossack owned the firm that blew up the whole Panama Papers shell game when a whistleblower did them in.

The cast could not be better, though Streep’s Ellen is underused, at least in terms of what we would like — but have no fear as she also turns up disguised as another character we meet along the way, and in the end gets to deliver the message and urgency of what The Laundromat is really all about. The film is worth seeing, but you only wish it were not so all over the place in order to make a stronger impact.

Producers are Soderbergh, Burns, Michael Sugar, Lawrence Grey and Gregory Jacobs. The Laundromat opens in limited theatrical run Friday before hitting Netflix on October 18. Check out my video review at the link above with scenes from the movie.

Do you plan to see The Laundromat? Let us know what you think.