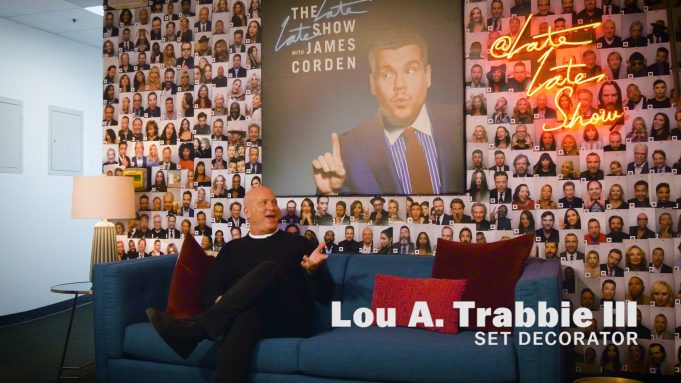 For set decorator Lou A. Trabbie III, “there’s never a dull moment” on the set of The Late Late Show, with James Corden at the helm.  20 years into his career by the time the CBS late-night talk show came around, Trabbie “had always had a knack for decorating and designing,” going back to childhood. “It’s always sort of been in my blood,” he explains. But even with credits on a diverse assortment of series, including Survivor and Dancing with the Stars, nothing could have prepared the craftsman for the experience to come.

When Corden came to CBS in 2015, he was a virtual unknown in the U.S., though he quickly made an impression as a disruptor in the late-night space. Developing wildly popular original segments like Carpool Karaoke, which then became series in their own right, the host also embraced social media as a powerful extension of his platform, driving nearly 20 million subscribers to his show’s YouTube page.

For Trabbie, The Late Late Show presented a fairly steep learning curve, and it took some time to feel at ease, turning around five shows a week. With ambition and creativity in no short supply on set, he simply had to dive in, learning to harness these forces without being fazed by the rigorous production schedule.

Over the years, the pushing of artistic boundaries has become routine, to the extent that Trabbie’s most basic conception of the series has changed. To the set decorator, The Late Late Show isn’t just a talk show; it’s come to occupy a space all its own.  “It really, truly is a sketch comedy show, and all these ideas—Carpool, and Crosswalk [the Musical] and Role Call—they’re all Corden’s ideas,” Trabbie explains. “The team brings them together, and I think that’s why this show is so popular.”

The second guest of Production Value, Emmys Edition, Trabbie recently invited Deadline to set, for a firsthand look at his creative process. On that day in April, the artist was hard at work assembling sets for a music video sketch. Featuring Corden and Paul Rudd, it involved a “’90s-vibe kids’ video, with a bit of a naughty twist.”

Two days prior, the set decorator received a script and set about his work, making use of props that had long been on his mind. “Most of the elements that are 2D were designed and printed here in our CBS Graphics Department,” Trabbie explained. “I know this space very well and know what fits, so I sort of start with that—how I could scale a set to be on our very small soundstage.”

For an inside look at Trabbie’s craft, and the process of putting together sets for Corden and Rudd’s “Wildly Inappropriate Kids Duo,” click above. To view the sketch in its finished form, click below.