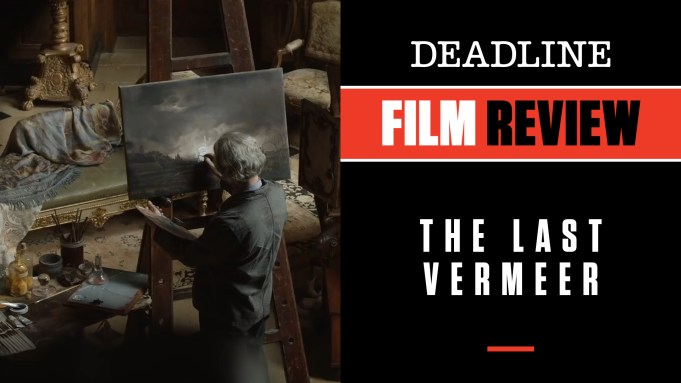 Shortly after World War II, bon vivant Dutch society icon Han van Meegeren went from a man who owned much of Amsterdam to a vilified traitor accused of selling priceless paintings of beloved artist Johannes Vermeer to the Nazis. Without looking for much evidence, the Dutch Ministry put him on trial in a case where the death penalty could be his fate if found guilty, which the ministers were sure he was. Enter Dutch resistance fighter and now-Investigator Captain Joseph Piller, who is tasked with proving his guilt. It seems at first to be a black-and-white case until, with the help of art historian Minna Holmberg, who serves as his assistant, the facts of the matter take some startling turns. Van Meegeren was a budding artist himself earlier in life but couldn’t get traction in a big way, but could he possibly be the greatest art forger who ever lived?

These are the questions at the heart of the plot of The Last Vermeer, a compelling drama set in and out of the courtroom that ultimately asks, fake or not: What is the true value of art? It also puts our own moral convictions front and center and suggests not everything the eye sees might be the full truth of it all. With three fascinating characters at its center, this is riveting stuff — a WWII-era story that incredibly has not been told before on film, and you have to wonder why. It really is the stuff of movies.

Piller (Danish actor Claes Bang) is a straightforward kind of man, not one prone to heavy dramatics and who largely sees the world in simple tones of black or white. Yet, as the story progresses, his own inner conflicts reflect those of his country as the questions about Van Meegeren (Australian star Guy Pearce) start outweighing the easy answers. Van Meegeren is a complex and interesting man, one who lives the high life until it all comes crashing down, but was he even more devious than anyone could possibly be? Was he responsible for more than one crime — or any crime, depending on who you are talking to? The trick to Pearce’s portrayal is that we are also asking those questions. Enormously helpful here is Minna (Vicky Krieps), who has the unique ability to see past the obvious and perhaps provide important pathways for Piller to explore another side of things. It’s a development that puts him at odds with authorities but one that will serve his conscience.

Based on Jonathan Lopez’s book, The Man Who Made Vermeers, this truly is a smart cinematic adaptation (James McGee and Mark Fergus & Hawk Ostby are the scripters) that gains its greatest strength from not turning into a pedestrian and typical courtroom showdown. Debuting feature director Dan Friedkin is too smart to let it play on outwardly predictable levels, and is blessed to have an international cast of the first rank go at the material. August Diehl (A Hidden Life) is among the fine supporting cast. Pearce might have the role of his life here and plays it for all its worth. Bang (The Square, Burnt Orange Heresy) is excellent, and so is Krieps (The Phantom Thread). Friedkin is making his directing debut but is no stranger to movies, having produced a long line of them including the Clint Eastwood hit The Mule and Ridley Scott’s All the Money in the World. Scott, in fact, joins him here as an executive producer. Clearly the mentorship was there as the production looks far more expensive than what it actually cost to make, including a splendid reproduction of Amsterdam circa 1947 (Arthur Max was production designer), as well as expert cinematography from Remy Adefarasin. This is a film well worth seeing, and a story at long last being told on a scale it deserves.

The Tristar movie opens in theaters on Friday. It debuted at the 2019 Telluride Film Festival under the title Lyrebird but finally will hit whichever theaters are open. Check out my video review with scenes from the film at the link above. Producers are Ryan Friedkin, Danny Friedkin and Bradley Thomas.

Do you plan to see The Last Vermeer? Let us know what you think.