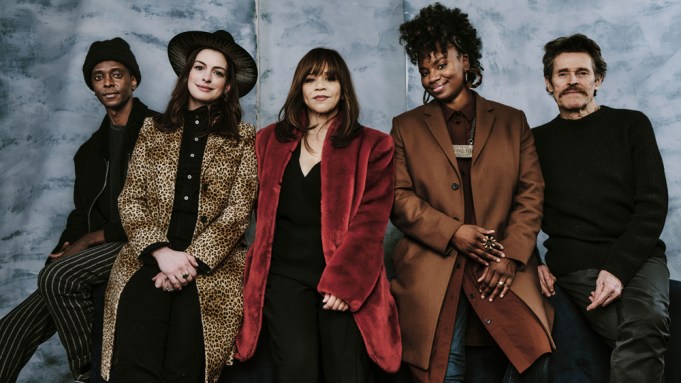 In Dee Rees’s adaptation of Joan Didion’s novel The Last Thing He Wanted, Anne Hathaway plays D.C. journalist and single mother Elena McMahon — an unlikely character for Hathaway for her to take on. The two were joined by actors Rosie Perez and Edi Gathegi in the Deadline Studio at Sundance as Rees talked about the challenges of adapting Didion and the Oscar-winning actress admitted how, at first, she wasn’t exactly the right person for the job.

The film follows the aforementioned Elena as she loses the thread of her own narrative when a guilt-propelled errand for her father (Willem Dafoe) thrusts her from byline to unwitting subject in the very story she’s trying to break. Rees adapted the film with screenwriter Marco Villalobos Marco, who the director said did a great job in adapting and give it context. However, there were still hurdles to leap over when it came to adapting the work of one of the greatest writers of our time.

“The challenge of adapting is the ‘why’ of it,” Rees told Deadline. “If you read Didion’s book it’s fragmented. It jumps around in time. There is no ‘why’. In fact, the entire novel is told through a narrator we never learn the identity of and there are so many ways to approach the character. The draw was Elena and her unraveling and the idea of ‘why’ and the things we do for our fathers and to stop cycles of guilt and abandonment.”

Hathaway first read Didion in her early 20s, when The Devil Wears Prada director David Frankel gifted her a stack of books and the author’s novel Play It As It Lays was in there.

“I never read anything like it,” Hathaway said. “It was so spare and also so precise and foggy and so sharp. I’ve been a fan of Didion a long time. I never imagined myself as one of her heroines…I am too much of a puppy dog for that.”

Hathaway said she had been a fan of Rees since Pariah and Mudbound and when she heard she was casting the movie, she was excited. ”I didn’t think I was gonna get it because I wasn’t the obvious choice for this,” she admitted.

Rees chimed in, “You’re so sweet! You’re so friendly!”

When Hathaway arrived to Puerto Rico to shoot the film, she joked that she can see Rees getting scared that she may not have been a perfect choice. It was then that Hathaway said, “Dee needs to meet Elena or I might get fired.”

With the outfit and appropriate make up, Hathaway transformed and started to be “a pain in the ass” on set, asking for her cigarettes — and this delighted Rees.

“It was a glorious challenge,” said Hathaway.