Continue to Deadline SKIP AD
You will be redirected back to your article in seconds
Skip to main content
September 21, 2020 5:25pm 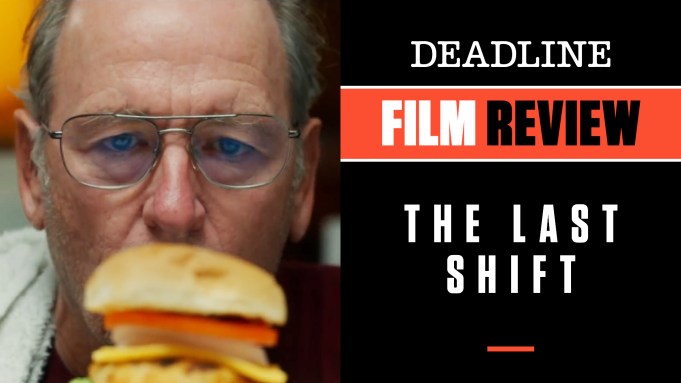 It should be no surprise to see executive producer Alexander Payne and producers Albert Berger’s and Ron Yerxa’s names on the credits for the new film The Last Shift, set in an ignored and decaying midwestern American town and focusing on a man retiring after 38 years working the same job in a greasy drive-thru fast-food restaurant. The trio has always been drawn to smaller-scaled, poignant character studies reflecting real lives, movies like the Oscar-nominated Nebraska.

This one is no different, a tiny gem of a drama dealing a lifelong Albion, MI working stiff named Stanley (Richard Jenkins) giving up the only job he ever had, minding the graveyard shift at Oscar’s Chicken & Fish, a gig he has been doing since 1971, and finally deciding to retire and tend to his dementia-stricken mother in Sarasota, FL. He lives with roommates in a flop house himself, doesn’t drive but has to learn, and basically peaked in high school. Over the course of a final weekend he must train his replacement, Jevon (Shane Paul McGhie), an aspiring writer just out on probation after serving time in county jail for some minor offenses made more major simply because he is a young Black man.

The crux of the film revolves around the shaky relationship between the pair as Stan tries to teach him the ropes of the place, still taking pride in making those sandwiches, while Jevon instantly labels this work for what it is — though it is the only kind he can get to help pay the bills for his girlfriend, Sydney (Birgundi Baker), and their young son. Asked how much he made when he started, Stan replies $3.10 an hour and now up to $13, a wage that horrifies Jevon who tries to convince him he has been wasting his life being taken advantage of by corporate heads making millions off the back of people like Stan. Jevon clearly has potential, but oddly like Stan he has been put in a box by society. Unlike Stan, he desperately seeks a way out in order to fulfill his true potential as a columnist.

Writer-director Andrew Cohn makes his narrative debut with this prescient and wise feature. He is an Emmy-winning documentary filmmaker whose work has focused on the have-nots, the largely dismissed people in small-town America. He has taken that first-hand knowledge, as well as his own roots in nearby Ann Arbor, to paint this portrait of what happens to those to whom promises were made and never kept in dying American towns. Stan is the kind of guy that gets attention only around election time, the Rust Belt blue-collar worker who believed the promises but seems blissfully ignorant that he is in the same boat as Jevon. Here is a guy who has watched his life go by just as fleetingly as the interactions with the customers who buy the fast food he serves up.

The Last Shift premiered at Sundance earlier this year, but now coming to whatever theatres are open and not playing Tenet, this is a movie perfectly timed for a country in the midst of unemployment high-water marks and before a presidential election that may well hinge on attracting the Stans and Jevons of the world to the polls. This movie does not wear politics on its sleeve, but it also does not stint at reflecting racial attitudes that seem even more pertinent than when it was made. It ultimately shows us a slice of America not often portrayed on screen, a slice of the divided country like one also seen in another equally fine earlier 2020 release, Working Man.

This one’s success lives or dies on its cast, and Cohn can thank his lucky stars — in this case Jenkins, a twice Oscar-nominated veteran actor who is incapable of a single false move. He inhabits Stan, limp and all, that halting body effort when he lifts himself up from a chair, the vagaries of age starting to show but not yet turning debilitating. Jenkins is always great on screen (he will also be seen in another of this week’s releases out of Sundance, Kajillionaire), and here he has a leading role truly worthy of his talents in playing an Everyman. There are dramatic moments of course — the mystery of some missing money in the register, an incident of being robbed outside a convenience store — but this is basically a quiet, and quietly heartbreaking, movie about imperfect people trying to live their lives with an ounce of hope. The chasm between Stan and Jevon is large, but the shared humanity shows up in subtle ways on their faces. It never offers fake optimism or a promise of change, maybe just a possibility for one of them.

Matching Jenkins is McGhie, who is pitch perfect as Jevon, and there is nice if brief support from Da’Vine Joy Randolph as Shazz, the manager of the restaurant, and Ed O’Neill as Stan’s faithful neighbor Dale.

Check out my video review above with scenes from the film. Do you plan to see The Last Shift? Let us know what you think.