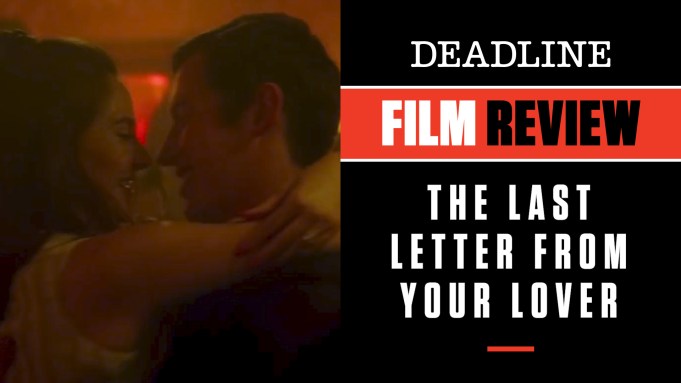 Since hitting screens in 2004, the romantic tearjerker The Notebook has had many imitators, but none has quite made audiences, mostly female, swoon quite like that one did. The litmus test for this type of film, generally from some sort of connection to author Nicholas Sparks, is still that Ryan Gosling-Rachel McAdams box office hit. The latest to join the club, The Last Letter from Your Lover, hits Netflix today.

This one actually is an adaptation of another successful romance writer, Jo Jo Moyes, whose Me Before You melted hearts in 2016. Screenwriters Nick Payne and Esta Spalding employ Moyes’ blueprint of spanning generations using not a notebook as a romantic connection but rather some long-forgotten letters to spark mystery and an investigation by a contemporary London journalist who stumbles upon them in her newsroom. How did they get there, and who wrote them?

That is the question dogging Ellie Haworth (Felicity Jones), who with the help of her archivist Rory McCallan (nicely played by Nabhaan Rizwan), sets out to learn more, and in the process perhaps ignite a relationship of their own. But it is all first set in place in 1965 with the story of Jennifer Stirling (Shailene Woodley), wife of a wealthy industrialist named Laurence (Joe Alwyn), who slowly becomes irresistibly involved with Anthony O’Hare (Callum Turner), the journalist who has come into her life while doing a story on her husband. But wait, in a plot device worthy of the greatest weepies, as they used to be affectionately known in Hollywood, we learn that Jennifer has been in a car accident and emerged with no memory of the men in her life and any of those letters she received, simply signed “B” in most cases. Flashbacks to her own life and flash-forwards to Ellie’s investigation fill in the details of what essentially is a story of two women in different eras both drawn to true love but not easily achieving it. And could it be that those letters from long ago are the engine that makes a direct connection between Ellie and Jennifer.

This film clearly is targeted at women, and because Moyes has such a following, The Last Letter from Your Lover likely will draw them to Netflix to check it out. I found the filmmaking from director Augustine Frizzell to be a little disjointed and thoroughly confusing as the tale of these two females unfolds in bits and pieces in the movie’s first half, but fortunately, once it finds its true footing, the film comes together, leading to a satisfying finish for lovers of all ages. Jones adds a lot of signature spunk to the proceedings, but I have to say Woodley seems a little miscast in an Audrey Hepburn-ish glamour role, dressed impeccably and caught up in luxurious surroundings. She doesn’t quite convince here and seems to be trying to connect to this character, never really making us believe in the passion she feels for this handsome man who has swept her off her feet. Part of the problem is Turner, who doesn’t help by turning in a flat, bloodless performance (no Ryan Gosing, he). Alwyn also plays a bit of a bore as her husband, so it is hard to feel much involvement in her romantic plight either way, at least for much of the film, this despite gorgeous Majorca locations that give the story some sweep.

We won’t give it away here, but oddly it is only the scenes toward the end when I really felt any simmering kind of connection. Once everything in the puzzle falls into place, and with the help of Daniel Hart’s lyrical score, this Notebook wannabe finally elicits a few tears and a reason to spend a summer evening streaming it all.

Producers are Simone Urdl, Jennifer Weiss, Graham Broadbent, and Peter Czernin. Check out my video review with scenes from the movie at the link above.

Do you plan to watch The Last Letter From Your Lover? Let us know what you think.