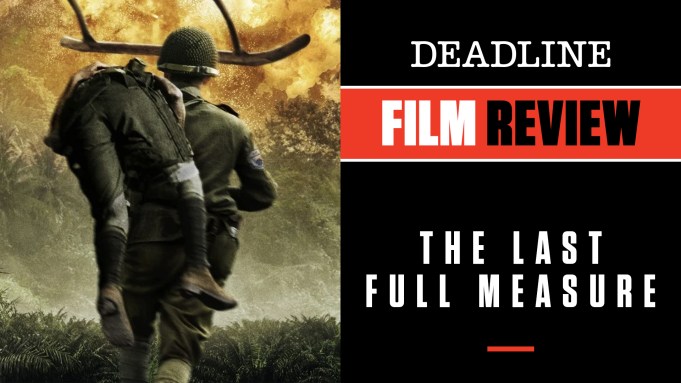 Some might feel that it manipulates your heartstrings, but writer-director Todd Robinson’s The Last Full Measure is the real deal, an effective Vietnam War movie told in flashback, that all too sadly shows how easy it is to forget who true heroes when politics gets in the way.

In a time where the current resident of the White House has so blatantly downgraded true valor and those who sacrificed, as we saw in his treatment of the late Sen. John McCain, maybe it is not so bad to have a movie remind us what really matters and what is really worth remembering. The Last Full Measure will lift you up and make you proud. An inspiring story of sacrifice, honor, courage and doing the right and decent thing, it is a movie that will reinforce your belief in true heroes and our own duty to make sure they are never forgotten. The all-star cast is superb, and this is a movie not to be missed, a real heart-tugger.

In April 1966, Pararescueman William Pitsenbarger, caught up in a bloody jungle battle in Vietnam, heroically saved 60 lives while sacrificing his own, as a whole unit was trapped in an impossible situation that looked like no one would survive. Some did, and they never forgot what he did for them, carrying around the guilt of living for many decades and then trying for 30 years to get Pitsenbarger the posthumous Medal of Honor he deserved.

Robinson intercuts the Vietnam scenes with those set in 1999. when the issue is brought up again and Pentagon staffer Scott Huffman (Sebastian Stan) is tasked with taking on the case that Pitsenbarger’s parents (a very fine Christopher Plummer and Diane Ladd) as well as a survivor, Tully (William Hurt), refuse to let go of. With bureaucracy ruling the day in D. C. this all seems like an impossible task, but Huffman forges ahead by going on a road trip and interviewing other survivors of that battle who can offer firsthand evidence of the heroism that took place that day. Samuel L. Jackson, Ed Harris, John Savage, and the late Peter Fonda in his last role play these men, and each clearly still suffers from the effects of that war, what they saw and shame for having lived while their friend died saving them.

As the film goes along Huffman discovers complications and the way D.C. really works in trying to right this wrong. His friend and colleague Carlton (Bradley Whitford) is a realist, urging him to let it go because it won’t be good for his career to take this growing quest any farther. The true facts of the case say otherwise and, it builds to a highly emotional climax that proves patriotism still has a place and so do heroes, even those who fight unpopular wars.

Robinson handles the Vietnam sequences nicely, and the individual scenes with Pitsenbarger’s surviving unit are quite moving and exceptionally well-acted, if bittersweet in the case of Fonda. This film has been gestating for a while, looking for distribution, but finally Roadside Attractions is putting it in theaters, where hopefully it will find a deserving audience. The long list of producers and executive producers is indication that it wasn’t easy to get made. We should be happy they did.

It opens Friday. Check out my video review with scenes from the film by clicking the link above. Do you plan to see The Last Full Measure? Let us know what you think.

‘The Last Full Measure’s Mark Damon On War Drama’s Journey &amp; Why This May Be His Last Picture As Producer