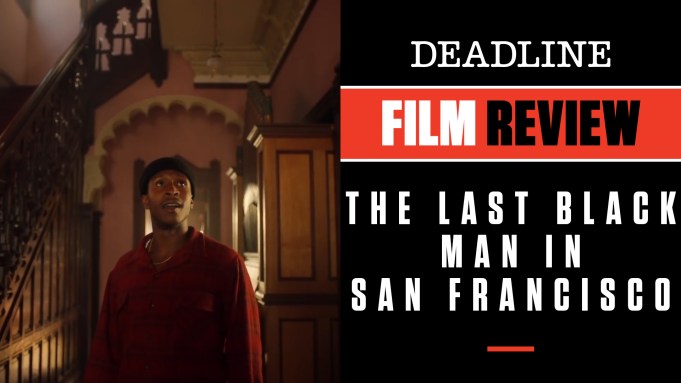 I am a little late to the game in terms of catching up with A24’s The Last Black Man in San Francisco, which slowly expanded into a few more theaters this weekend and will be going wider in the next few weeks. Well, better late than never, but this is a movie I urge you to see, and like many who will be discovering it on their terms I found it unforgettable.

It is the first film actually released in 2019 so far that I guarantee will be on my year-end 10 best list, and it is the one that I would say at nearly the halfway point of a disappointing year easily is the best film I have seen that is available in theatres to date.

That shouldn’t be surprising as the producers behind it are Plan B, the company that won Best Picture Oscars for 12 Years a Slave and Moonlight — the latter also released by A24 and seems closest in spirit to this one due to its poetic tone. However The Last Black Man in San Francisco stands on its own; it’s as unique and uniquely involving a film I have seen in some time, a sensational feature film debut from director Joe Talbot, who co-wrote with with Rob Richert. It premiered at Sundance in January, and its critical acclaim is justified, much more than many of the overhyped films that come roaring out of film festivals only to fall completely flat when paying moviegoers get their say. This one stays with you in a haunting way.

It is at once a love letter to the City by the Bay, as it is about the human effects of gentrification — essentially a tale of two cities, one of the haves and one of the have-nots, told through the eyes of two lifelong friends, one trying to recapture his past, the other trying to define his future. Oddly there are similarities to last year’s Blindspotting, which dealt with gentrification in Oakland in the Bay Area, but this film is definitely superior in every way. It deserves to be remembered at Oscar time.

Jimmie Fails (played by namesake Jimmie Fails) is a young man who works at a place helping old people, rides around the city on his skateboard and has big dreams of reclaiming his childhood home: a beautiful Victorian house that family legend says was built by his grandfather in 1946. Even though it now is owned by a white couple, Jimmie shows up, often with BFF and aspiring playwright Montgomery (Jonathan Majors), and starts painting the window trims, doing a little gardening and generally acting like it’s his place. He clearly has a special connection, but the less-than-empathetic wife who lives there is getting hysterical and fed up with his meddling, which admittedly is a bit jarring at first.

As luck would have it, however, one day Jimmie comes by to see that the house has been abandoned, emptied of everything and the couple suddenly has moved. In no time he hatches a plan to claim squatter’s rights, changes the locks, gets the gas bill put in his name and invites Montgomery to move in with him. Jimmie has been drifting in recent times, even living out of a car, but most recently in a room with Montgomery and Mont’s blind grandfather (nicely played by Danny Glover) at their house. During a visit to his aunt (a very fine Tichina Arnold), Jimmie discovers she has stored all the old furniture from that home in her attic and offers to let Jimmie cart it away. He plans to re-create it the way it lives in his memory. A real estate agent (Finn Wittrock) has other plans, though. And a loan officer also can’t help, saying the house is worth $4 million and Jimmie would need to put 20% down, way out of his league.

The film moves along with the rhythms of the city, the moods change, Jimmie’s and Montgomery’s less ambitious friends make fun of them, harsh reality interferes with dreams, and the film gets you in its grip and hits you hard in the heart. The stunning cinematography is the work of Adam Newport Berra, excellent production design from Jona Tochet and the memorable score from Emile Moseri. The use of songs like “San Francisco (Be Sure to Wear Flowers in Your Hair)” is inspired, adding the perfect unexpected touch to a film that will have you thinking. Both Fails and Majors are simply superb, as is the rest of a great cast.

Thomas Wolfe famously said, “You can’t go home again.” This is a movie about someone trying to do just that, but maybe discovering that “home” isn’t necessarily what we imagined it to be. Producers are Dede Gardner, Jeremy Kleiner, Khaliah Neal, and Talbot. Check out my video review at the link above which includes scenes from the movie.

Do you plan to see The Last Black Man in San Francisco? Let us know what you think.