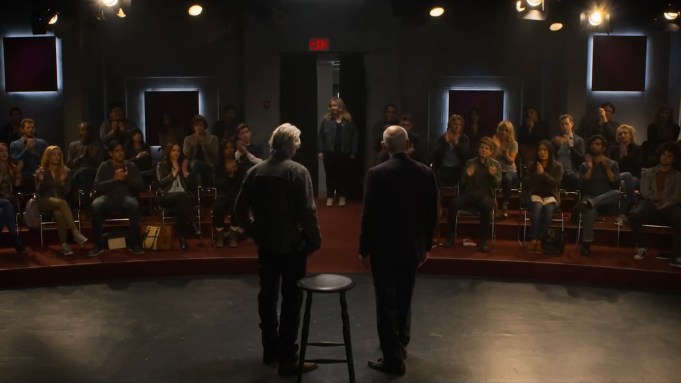 The Kominsky Method is Chuck Lorre’s latest attempt at harnessing the beast known as streaming. And while it is a definite improvement over the stoner faceplant of his now-canceled Disjointed, The Big Bang Theory co-creator still has a long way to go in losing his broadcast inhibitions as the Michael Douglas-Alan Arkin starrer the launches November 16 on Netflix makes clear.

With Douglas back in a TV series lead role for the first time since the great The Streets of San Francisco in the 1970s, the Oscar winner and that other Oscar winner Arkin are a great combo in the 10-episode series — in theory. The stumbling block is that as strong as their chemistry playing the almost-big-star Sandy Kominsky and his longtime loyal agent Norman clashing with the realities of aging, the scripts in Kominsky Method do not serve them or viewers well, as I say in my video review above.

The narrative pothole in what could be Grace and Frankie for boys is that this AARP tale is a whole lot of set-ups and bits with nowhere really to go. In what is fundamentally a plotless old-boys club, the writing often feels like scraps of the early years of the Lorre’s Two and A Half Men with a combover.

Unlike obvious comparisons to the Jane Fonda- and Lily Tomlin-led Netflix series — or when it comes to Kominsky’s acting seminars, HBO’s Barry — the series co-starring Last Man Standing’s Nancy Travis, Sarah Baker and Lisa Edelstein has no foils, conflict or much of anything to push against. Long story short, it means it lacks spark. There is a jab at CBS for being too diverse in its casting nowadays, the movie Cocoon for seeming suddenly too relevant, and way too many urination complications as a way of defining how age and the pace of change has seemingly left Sandy and Norman in the dust. There also are several cheap shots dressed up as sideswipes at entitled millennials, slightly creepy hook-ups and a Danny DeVito cameo. All of which add a degree of binge-worth shine but are really not very insightful, nor do they offer anything interesting to really say about growing old with money in the bank in the dream town of Los Angeles.

It is worth checking out The Kominsky Method to see Douglas and Arkin, but the attraction is light at best.

For more of my take on this latest Lorre effort, click on my video review above. Will you be watching, or is the debut of Narcos: Mexico the same day more your speed?