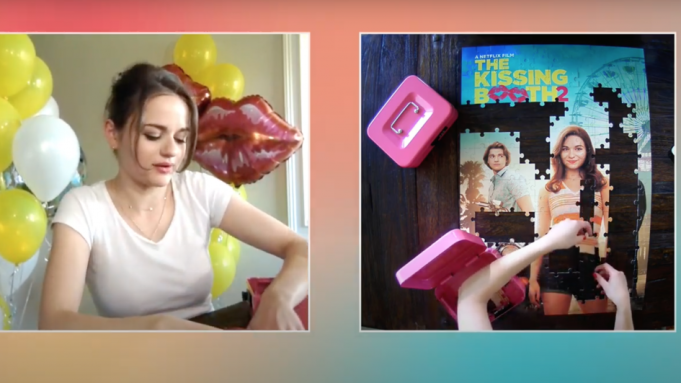 Many people are doing a lot of things like puzzles and face timing with friends and family to pass the time during the quarantine. That said, Netflix decided to reveal the premiere date of the forthcoming rom-com The Kissing Booth 2 by doing both! Star Joey King worked on the puzzle live to reveal that the pic will be dropping on the streaming platform on July 24.

Directed by Vince Marcello from a script he wrote with Jay Arnold, the sequel brings us back to Elle Evans (King)  who just had the most romantic summer of her life with her reformed bad-boy boyfriend Noah Flynn (Jacob Elordi). But now, they have gone in different directions —  Noah is off to Harvard while Elle heads back to high school for her senior year. She’ll have to juggle a long-distance relationship, getting into her dream college with her best friend Lee (Joel Courtney), and the complications brought on by a close friendship with a handsome new classmate named Marco (Taylor Zakhar Perez). For Noah, he is growing close to a seemingly-perfect college girl (Maisie Richardson-Sellers) — and this tests Elle’s trust of him.

Based on characters from Beth Reekles’ YA novel, the movie also stars Meganne Young and Molly Ringwald. Watch the video of the puzzle reveal above and check out the new poster below.