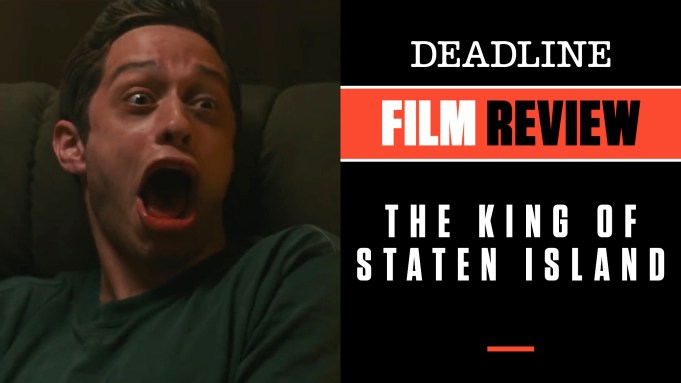 Earlier during this pandemic, I reviewed Big Time Adolescence, in which Pete Davidson plays a weed-smoking slacker aimlessly marching through life. This week Universal opens director Judd Apatow’s The King of Staten Island, in which Davidson also appears to be a weed-smoking slacker. But the comparison stops there because this poignant and touching human dramedy comes directly from the real-life experience of its star, and along with the comedy comes some sharp character development and authentic feeling.

This is not only a breakout movie for Davidson, best known for Saturday Night Live, but is also — flat out — one of the best outings as a director for Apatow (Trainwreck, The 40 Year Old Virgin, Knocked Up). The tricky mix of laughs and life is not easy to achieve, as Apatow discovered in the worthwhile but uneven Funny People, but he does it here in impressive style with a sharp script he co-wrote with Davidson and Dave Sirus.

Set and shot on Staten Island, where Davidson grew up, this project grew out of the comedian’s desire to escape his own demons that began when at age 7 he lost his father, a fireman who died on 9/11 responding to the World Trade Center disaster. That incident informed much of his life but plays out here in a more fictional way, though Davidson says about 75% of it is all him. He plays Scott Carlin, a 24-year-old living with his mother, Margie (Marisa Tomei), and seemingly with no big goal other than to open his own tattoo business someday. He still hurts from the loss of his dad at such a young age, and there are moments when his depression and ongoing grief seem to be teetering on the edge, playing with his own brand of fire like closing his eyes while driving on a crowded highway.

His sister Claire (a fine Maude Apatow) is much more ambitious and accomplished as she heads off to college while Scott just hangs with his buddies Oscar (Ricky Velez), Igor (Moises Arias) and Richie (Lou Wilson), and much of the time they seem like kids who have yet to take responsibility for their lives as the world leaves them behind. Scott also quietly hooks up when he wants with Kelsey (the terrific Bel Powley), a childhood friend who clearly is crazy for this guy who can’t commit. But trouble comes in the form of his mom’s new boyfriend, Ray (Bill Burr), her first since his fireman father tragically died on the job. That this guy also is a fireman does not go down well with Scott, and their relationship which starts off on an amusingly disastrous note in the first place — you’ve heard of “meet cute” in movies? This one is “meet angry” — only goes downhill from there, even resulting in a knock-down fight at one point.  Margie has compassion for her son but also wants more for him, and herself, and Ray seems like second chance at happiness and the right moment to shake up their status quo.

Scott doesn’t always make the right decisions, particularly when he serves at lookout while his buddies decide to rob a liquor store, but that is part of his odd charm. The robbery sequence seemed a little contrived, a bit off from the tone of the rest of the film, which Apatow balances masterfully, but it is a minor quibble in a movie that wants us to understand this guy and hope for the best for him — and Davidson. Knowing the star’s own publicly discussed personal battles, we root for them both to find a happy ending here.

The King of Staten Island is a triumph for both Davidson, who is natural and winning in his first full lead role, and for Apatow, who previously cast him in a small role in Trainwreck and has a knack for turning raw young comedic talents like Seth Rogen and Amy Schumer into movie stars. Tomei is lovely here, and especially good when she lets loose on Ray and Scott after their battle royal. I loved the casting of Scott’s friends, each distinct and recognizable — especially Arias, who made a real impression in 2013’s em, The Kings of Summer and proves a scene stealer once again.

Nice supporting turns also come from Steve Buscemi and Better Things star Pamela Adlon, the latter playing the biting ex-wife of Ray. Burr, a stand-up comic who influenced Davidson very early in his own comedy career, is pitch perfect in this fresh, funny, smart and winning human film full of life that gets the summer off to a great start. It can’t really be defined or pigeonholed as either comedy (which we were expecting considering the talent involved) or drama. It is just the stuff of life, and in this case the life of Pete Davidson.

Apatow and Barry Mendel produced. Universal opens the film on VOD and digital platforms Friday instead of the planned theatrical release KO’d by the coronavirus pandemic. Check out my video review at the link above with scenes from the film.

Do you plan to see The King of Staten Island? Let us know what you think.