Continue to Deadline SKIP AD
You will be redirected back to your article in seconds
Skip to main content
June 11, 2021 2:37pm 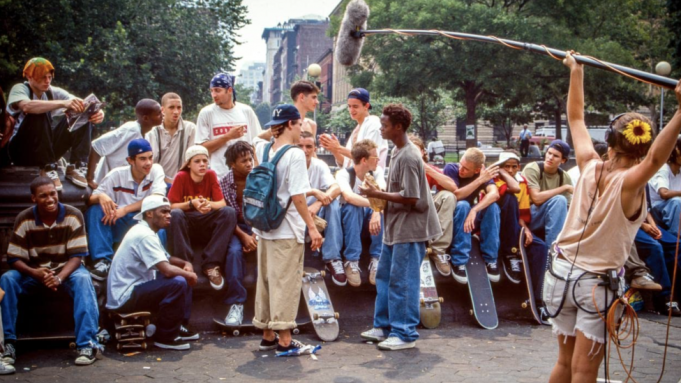 When the movie Kids came out in 1995 some people mistakenly thought it was a documentary. The misimpression came from the urgent, visceral presentation of a tribe of teenagers in New York’s lower east side who lived marginal lives built around sex, drugs and skateboarding.

There were other reasons for the shock of authenticity—screenwriter Harmony Korine wrote the story after closely observing kids from broken homes hanging out in Washington Square, and director Larry Clark cast many of those very teens in the film, playing versions of themselves.

The documentary The Kids, premiering tonight at the Tribeca Festival, explores the origins of the film, the questionable ethics of Clark and Korine, and the impact of its success on the nonprofessional actors who appeared in it, especially Justin Pierce, Harold Hunter, and Hamilton Harris (co-stars Rosario Dawson and Chloë Sevigny gained fame from Kids, but they weren’t part of the real skateboarding scene).

Pierce was a homeless runaway before Kids was made; Hunter’s parents had both died as a result of drug addictions, and Harris came from a dysfunctional family. Only one of the three, Harris, would live beyond the age of 31.

“Trauma was the catalyst for me,” Harris said during an appearance in Deadline’s virtual Tribeca Studio, explaining why he wanted to be part of The Kids. “It was really after Harold Hunter, one of the main characters, when he passed away that was, for me, a wakeup call to dealing with my own personal traumas and my shadow self, and I needed to work it out. Something just was drawing me towards storytelling and using this storytelling medium as a platform to heal.”

The non-pro actors were paid little to make Kids, but they were plied with pot on set. Hunter was filmed nude in one scene, although whether as a then 20-year-old nonprofessional actor he knew what he was consenting to is open to question. Clark and Korine were showered with attention as their film created a cultural sensation, but didn’t appear eager to share the spotlight with their teen collaborators.

“Twenty five years ago, yes, I felt exploited. Yes, I felt, ‘Aw, man, I thought it was going to be more than it actually was.’ Twenty five years later, today, in my late 40s, I see differently,” Harris noted. “From an ethical standpoint, yeah, I wouldn’t do it that way. I’d do it differently. It’s not my place to say whether or not Larry is right or wrong. I think each of us can decide what that is for ourselves.”

Asked if The Kids also raises troubling questions about cultural appropriation, director Eddie Martin responded, “One hundred percent.” Martin said he reached out to Clark and Korine for interviews but neither responded.

“We would have loved to have had their side of the story, but for whatever reasons they didn’t want to share that,” Martin said. “I do, however, find it interesting how Hamilton and his friends and community were so giving to them back when they made their film in the ’90s, but now that the roles are reversed it wasn’t quite matched.”

The Deadline Studio is presented by Verimatrix. For more from our conversation with Martin and Harris, click on the video above.