Continue to Deadline SKIP AD
You will be redirected back to your article in seconds
Skip to main content
March 17, 2022 8:30am 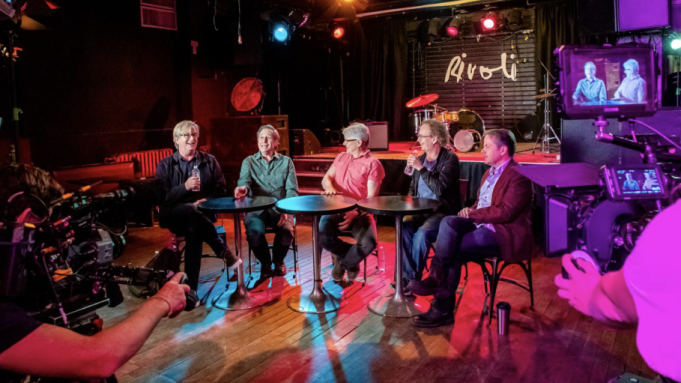 When The Kids in the Hall sketch comedy series hit TV in the late 1980s, it rapidly developed a devoted fan base. Stars Dave Foley, Kevin McDonald, Mark McKinney, Bruce McCullough, and Scott Thompson – all nurtured in Canada — created an array of human, yet often twisted characters including Buddy Cole, the Chicken Lady, and prostitutes Maudre and Jocelyn.

Now, more than 30 years after the show’s debut, the documentary The Kids in the Hall: Comedy Punks, celebrates The Kids’ achievements and what made them distinct, for instance, from Saturday Night Live or SCTV.

“They came out of a very punk sensibility and they weren’t doing directly political humor or direct sort of commercial parody,” said executive producer Nick McKinney, younger brother of series star Mark McKinney, as he stopped by Deadline’s SXSW Studio. “They were really doing something, I guess you could say, almost a little bit more nebulous, but very countercultural — sort of about angst in the suburbs and crappy white-collar jobs.”

The cast excelled at playing comedic female characters, but did it in a very different way than, say, Monty Python had.

“The Kids, to the extent that a man can inhabit a woman, did an amazing job of sort of creating these relatable characters,” McKinney said. “I know my brother based at least a couple of those characters a little bit on my mother, a little bit on my sister, imported that into himself… Up until then, if I remember what drag looked like on TV, it was a lampoon, it was way larger than life.”

“In Toronto, when I was at the Rivoli Club where they started, there’d be a small audience and you would hear gasps when [Scott] came out as a queer positive character,” executive producer Paul Myers remembers. “[Thompson] assimilated within the troupe. There was no sense of, ‘He was the only [one] doing this gay thing over here.’ They were allies and they were all just working together. That, just by being there, was political, and there were audience members I recall in Toronto who were shocked back in the day. This is the 80s, you know, so it’s amazing to think in some ways how far we’ve come.”

Watch the conversation with Myers (older brother of SNL star Mike Myers), McKinney, and documentary director Reg Harkema in the video above.