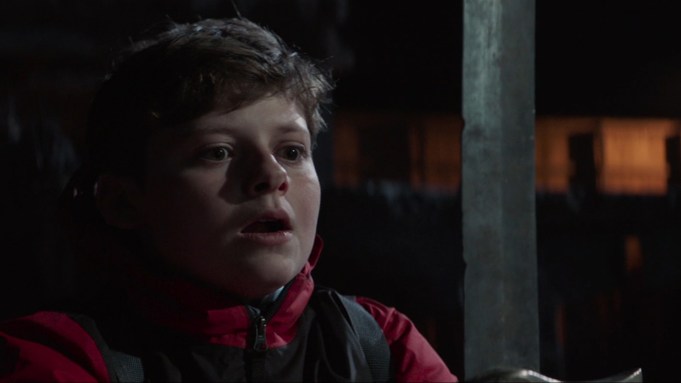 After the brilliantly funny and caustic Attack the Block, which pitted invading aliens against a gang of British teens, it has taken eight years for director Joe Cornish to follow it up with a second film. Unfortunately, The Kid Who Would Be King is more influenced by the success of the Harry Potter films than anything resembling the cult-ish delights of Attack the Block.

Having said that, there is nothing about this kids film that its intended audience won’t find appealing, but it doesn’t reach beyond the demo in order to become a really engaging or enlightening family entertainment that everyone in the clan might enjoy. Mixing lots of stuff from Lord of the Rings to Game of Thrones — and particularly the legend of King Arthur and Sword in the Stone — Cornish throws everything against the wall in this kid fantasy flick, but only some of it sticks.

Set in contemporary, divided, Brexit-infused England, the plot revolves around a 12-year-old named Alex (nicely played by Louis Ashbourne Serkis — son of Andy) who along with his BFF Bedders (an endearing Dean Chaumoo) are bullied at their Dungate Academy school by other students, notably Kaye (Rhianna Doris) and Lance (Tom Taylor), the latter who fancies himself King of Dungate. Constantly harassed by these dopes, Alex and Bedders find themselves in a deserted construction site, where Alex discovers what turns out to be the long untouched Excalibur, which he manages effortlessly to pull out of the concrete.

Soon he is infected with the spirit, and perhaps powers, of King Arthur, but things get complicated when Sorceress (and sister of Arthur) Morgana (Rebecca Ferguson) turns up, determined to wrest Excalibur from the young would-be-hero’s hands and rule the world. She’s colorful enough but largely the kind of one-note villain that draws yawns rather than fear. Into all of this of course comes several incarnations of the fabled Merlin, mostly as a sneezing young teen version played by Angus Imrie, but also an older edition (the always welcome Patrick Stewart, in a Led Zeppelin T-shirt) and even an Owl. With side trips to Cornwall and other notable locations, this quest for Camelot looks attractive and wraps up with a nice action set piece in which Alex leads the kids at school, now his small band of Knights, in a battle to save England from its current division and self-inflicted ills and prove he’s a born leader, if not quite the hero movies often portray.

Properly rated PG, this is harmless enough stuff and should do well with the younger set, who probably would get more excited by another edition of Harry Potter or LOTR. But I have say on every level this is at least an improvement on the last cinematic attempt to bring the Arthurian legend to the screen, Guy Ritchie’s abysmal 2017 King Arthur: Legend of the Sword.

Producers for Working Title are Tim Bevan, Eric Fellner and Nira Park. 20th Century Fox releases it Friday. Check out my video review above with scenes from the movie.

Do you plan to see The Kid Who Would Be King? Let us know what you think.