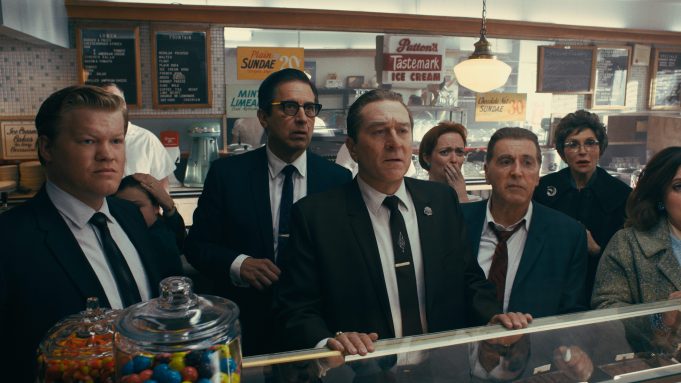 The Irishman, the latest gangster epic from Martin Scorsese that this week racked up five Golden Globe nominations, has generated a great deal of conversation this awards season, centered on its innovative use of visual effects.

Following Frank “The Irishman” Sheeran (Robert De Niro), an aging hitman looking back on the crimes he committed for the Bufalino crime family, and the role he claims to have played in the slaying of Jimmy Hoffa (Al Pacino), the film’s effects were spearheaded by ILM’s Pablo Helman, who de-aged Scorsese’s set of A-list stars in a way that’s never been done before.

“The film takes place from 1949 to 2000, and goes back and forth in time. Problem is, by the time I was ready to make the film, Bob De Niro and Al Pacino and [Joe] Pesci could no longer play these characters younger in makeup,” Scorsese explains in the exclusive featurette above.

It was during the filming of Silence in Taiwan that Helman first approached Scorsese with the assurance that he could pull off The Irishman’s de-aging. “I said, ‘Ah, I don’t know. I can’t have the actors talking to each other with golf balls on their faces,’” the director recalls. “‘It maybe gets in the way, with the actors, and the kind of film this is, they need to play off each other.’”

Taking a deep breath, Helman committed in his mind to developing the technology that would make The Irishman shoot possible—a shoot where the director and his actors could play and move freely, without any sense of restriction.

“We immediately divided into two groups: one that was developing the camera system, and the other one that kept working on the software,” Helman shares. “We developed this new rig, which is the camera surrounded by two…witness cameras, which are infrared cameras.”

“It was called ‘The Three-Headed Monster,’” Scorsese says with a smile. “It didn’t look like a monster to me, though. It was kind of nice.”

Along with this new rig came a software called Flux, which the team at ILM used to capture the facial performances of the actors. “It’s able to see how the face is shaded, and how the lighting is hitting it, and generate a lot of detail,” layout supervisor Douglas Moore says. “You’d [then] incorporate this into our 3D model.”

For the Irishman VFX team, getting the de-aging of De Niro, Pacino and Pesci right also involved looking at each actor’s entire body of work. “We went through an entire library of scenes extracted from all of their past films, across a spectrum of ages,” digital model supervisor Paul Giacoppo notes, “to try to distill what their younger selves looked like in this film.”

Ultimately, Helman hopes that the use of VFX in The Irishman will serve as “a referendum on technology,” he says. With the VES Awards nominations to be announced January 6, followed by the Oscar nominations January 13, we’ll see if the VFX Supervisor’s wish becomes a reality.

For a look at the process of de-aging The Irishman’s actors, click on the video above.