Continue to Deadline SKIP AD
You will be redirected back to your article in seconds
Skip to main content
November 27, 2019 1:59pm 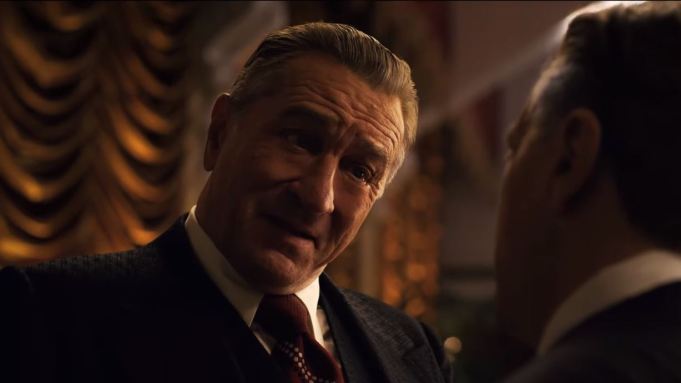 EXCLUSIVE: In the mob world of Martin Scorsese’s The Irishman, only the strong are unlucky enough to survive. That’s one way to read the 50-year underworld odyssey of hitman Frank Sheeran, the title character played by Robert De Niro in the film with resounding emotional impact.

“Your heart breaks for him,” producer Jane Rosenthal says in a new featurette highlighting De Niro’s performance in the movie, which went live today on Netflix after a brief theatrical run. Check it out above.

De-aging digital wizardry allowed De Niro to portray the mob soldier across the entire second half of the 20th century. “The film takes place between 1949 and 2000, it goes back and forth through time continuously,” Scorsese notes in the featurette. “Bob played everything from that perspective.”

The perspective of a five-decade survivor in a cutthroat business is one that De Niro might have been able to relate to personally. Last year marked the 50th anniversary of his first major screen role, which came in Brian De Palma’s 1968 draft-dodging satire Greetings.

The Oscar-winning actor’s filmography is an eclectic one, but he is well known for playing gangland figures in movies by esteemed auteurs such as Scorsese (Goodfellas, Casino), Francis Ford Coppola (The Godfather Part II), and De Palma (The Untouchables).

The Irishman marks De Niro’s reunion effort with his most celebrated collaborator, master filmmaker Scorsese, and the role provides a chance to portray a man looking into the twilight of his troubled life and wondering what awaits him next. “Don’t shut the door all the way, I don’t like that,” Sheeran tells a priest who visits him near the end of his days. “Just leave it open a little bit.