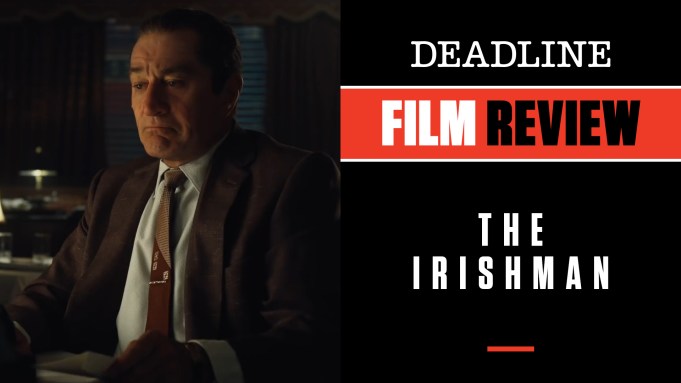 At the New York Film Festival (and select West Coast screenings) this weekend, the lid was taken off one of 2019’s most anticipated movies. Martin Scorsese’s long-awaited adaptation of The Irishman is the Netflix mob crime film based on Charles Brandt’s 2004 book I Heard You Paint Houses, which offers lots of food for thought but has its detractors. The good news is the property now is in the hands of Scorsese, who is back in top form, helped by a superb adaptation from screenwriter Steven Zaillian, who last worked with him on Gangs of New York.

This take on crime figure Frank Sheeran, a truck driver-turned-mob hitman and later accomplice with labor leader Jimmy Hoffa, is vintage Scorsese. The Irishman is a perfect coda to the series of crime films he has done from Mean Streets to Goodfellas to Casino to his Oscar winner The Departed. If anyone can pull off this kind of tale, it’s Scorsese — and pull it off he definitely does.

Spanning decades, it ties the mob to various historical events from the Bay of Pigs in Cuba to JFK’s presidency to Watergate and many points in between. But the film’s focus is on Sheeran, superbly played by longtime Scorsese collaborator Robert De Niro, a trucker driven to small crimes on the side who by chance finds himself taken under the wing of Bufalino crime family leader Russell Bufalino (Joe Pesci) as a hitman. Their teaming later led to a close association with notorious Teamsters leader Hoffa (Al Pacino), one that goes all the way to Hoffa’s still officially unsolved disappearance in 1975. At the end of his life, Sheeran gave his account of things to Brandt, and that is the take the film follows as it is narrated by the character from an old-age home.

Although the book made some controversial claims from Sheeran, Scorsese’s film treats this long and winding tale as pure truth, not even resorting to end cards explaining the aftermath, contradictions or subsequent investigations. Instead, it simply lets the film speak for itself as a sometimes moving meditation on aging; on how we treat each other; our own life’s decisions, regrets, and consequences for family; and on outliving our contemporaries — finally being left with memories and not much more. Scorsese and Zaillian seem less concerned with nitpicking about the facts, choosing to “print the legend” and concentrating on these characters and their relationship to one another and themselves. Each scene is so finely written, crafted and acted, you really have to marvel about the masterful way Scorsese pulls this melancholic epic together over the course of 3 1/2 hours. Considering that its reported $160 million price tag was funded by Netflix, could it have been a limited TV series instead? Absolutely, but I have to say it works brilliantly as a big-screen experience, one that actually gains from the level of concentration seeing it in a theatrical setting requires, seeing it as a final companion to the Scorsese classics in the genre, or the Godfather films — particularly the first, which ends on a similar note of quietude.

Its sheer length and time-spanning narrative puts this one in the epic category, but it is a much smaller and ruminative story than that term might indicate. The gargantuan cost can be attributed to the ground-breaking CGI work that allows its principal actor to “de-age” 30 years. Having seen this technique tried out on Marvel movies with Michael Douglas in Ant-Man and Samuel L. Jackson in Captain Marvel, I found those examples jarring. Here it is perfection to the point I didn’t really notice it at all. It seemed utterly natural, never bringing attention to itself with the actors pulling it all off flawlessly. It was actually the old-age makeup for De Niro and Pesci in a scene toward the end that I found most jarring, not the VFX. Nevertheless, you can see the Midas touch of Scorsese in taking this technology to a new level that lays it at the feet of storytelling, not gimmick.

The Irishman excels in every department — from exceptional cinematography by Rodrigo Prieto to Sandy Powell’s and Christopher Peterson’s  costumes, Bob Shaw’s production design aided by fine work from the art directors, Robbie Robertson’s elegiac score, and longtime Scorsese editor Thelma Schoonmaker. The casting by Ellen Lewis is monumental and would deserve an Oscar if there was one for casting directors (there isn’t). Right down to the smallest part it feels authentic to the bone, a chance to revel in this underworld one last time. Harvey Keitel as a mob boss, Bobby Cannavale, Ray Romano, Stephen Graham, Jesse Plemons and more add lots of flavor. The female roles are fairly minimal this time, but Lucy Gallina as Frank’s disapproving daughter Peggy uses silence to make a strong impression.

Ultimately the film belongs to its three stars. Pesci is highly impressive coming out of retirement to play a more refined role than he has before as the tough, exacting but compassionate Bufalino. De Niro never loses track of Sheeran, even if it turns out to be a more understated portrayal by necessity. However it is Pacino, working for the first time with Scorsese, who steals the film by diving into one of the best roles of his career, delivering on all cylinders as Hoffa.

Producers are De Niro, Scorsese, Jane Rosenthal, Emma Tillinger Koskoff, Irwin Winkler, Troy Allen, Gerald Chamales, Randall Emmett and Gastov Pavlovich — a list that proves it takes a village to get a project like this off the ground, but thankfully they were able to do it once Netflix gave the green light. It is well worth the effort. Netflix puts it into limited theatrical release on November 1 and begins streaming on November 27. Check out my video review above with scenes from the movie.

Do you plan to see The Irishman? Let us know what you think.