The Film That Lit My Fuse: Emmys Host Cedric The Entertainer On The Transformative Power Of ‘Coming To America’
Read the full story
January 22, 2020 3:57pm
10Comments 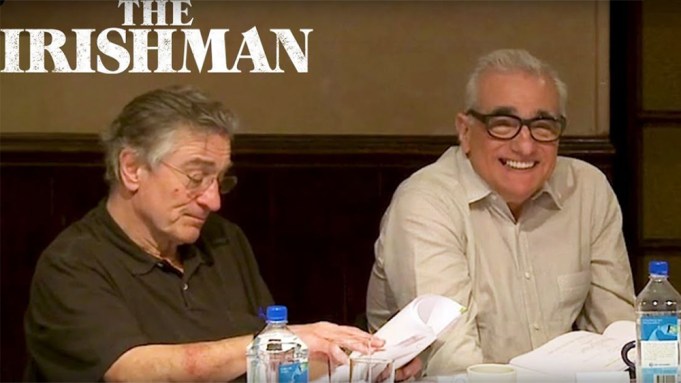 EXCLUSIVE: Martin Scorsese’s long-gestating adaptation of Charles Brandt’s 2004 book I Heard You Paint Houses, later retitled The Irishman for the film, has been a fixture this awards season, and now you can watch the first table read for the project from nearly seven years ago. Check it out above.

It is fascinating to watch stars Robert De Niro, Al Pacino and Joe Pesci at the beginning of their work in shaping these characters in this exclusive featurette, which juxtaposes segments from the table read with actual scenes from the film and excerpts from Steven Zaillian’s script.

Shot over the course of 108 days, the production employed 6,000 background actors, 200-plus characters and 295 locations, it has taken a very long 12 years to get to the screen, with many roadblocks along the way. To demonstrate just how long it has been, in 2013 Scorsese gathered stars Robert De Niro, Pacino, and Pesci for the first table read of the project with the goal of enticing investors to the costly film that required numerous de-aging special effects to makes its main stars appear decades younger.

Netflix’s The Irishman is nominated for 10 Academy Awards including Best Picture, Director, Adapted Screenplay for Zaillian and Supporting Actor for both Pacino and Pesci (the latter came out of retirement to do the film). It also is up for nine BAFTA Awards and won the Ensemble Cast prize at the Critics’ Choice Awards, and several other honors from critics groups.

Scorsese now is the most Oscar-nominated living director with nine noms in the Best Director category. He won once for 2006’s The Departed. He also is nominated for a DGA Award this weekend.

Oscars: A Record Four Movies With 10+ Nominations &amp; The ‘Parasite’ Factor Means This Thing Is As Wide Open As It Gets – Analysis