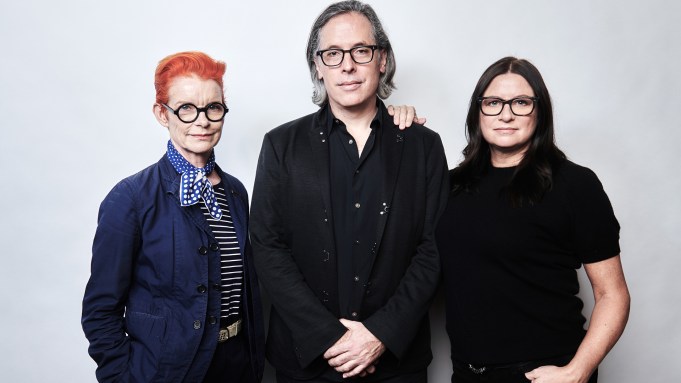 Much has been discussed of the de-aging of characters in The Irishman, Martin Scorsese’s mob epic starring Robert De Niro, Al Pacino and Joe Pesci that spans three decades in the life of hitman Frank Sheeran. It seems like the technology has paid off, certainly in critics’ eyes: the Netflix pic has already won Best Film honors from the National Board of Review and New York Film Critics Circle and is gathering steam for the Oscars.

But as the film’s Oscar-nominated director of photography Rodrigo Prieto and Oscar-winning costume designer Sandy Powell discussed onstage at Deadline’s annual The Contenders Los Angeles, the work to evoke the film’s look and feel has as much influence as tech on the final product.

“For me the whole thing is the movie is about the passage of time,” Prieto said onstage at the DGA Theater in front of a packed house of Academy and guild voters, on the panel that included Powell as well as producer Emma Tillinger Koskoff. “That is a very important theme in the film, [and it] required creating different looks for different for the years. For the ’50s we used kodachrome emulation, then ektachrome, and then toward the ’70s a different technique that drained the color from it.

“It was all based on our collective memory of still photography … since the movie is a lot about that — about memory, what life is now and the passage of time,” added Prieto, who also discussed the creation of the three-camera rig used in scenes where characters would be younger-ized. “So part of it was certainly the de-aging, but I even saw a cut of the movie without de-aging, and it worked, and I think the big part of it was just the design to make these looks work — hopefully a sensation of a memory.”

For Powell, who has won Oscars for Scorsese’s The Aviator as well as Shakespeare In Love and Young Victoria, that subtlety was threaded into the characters’ clothes.