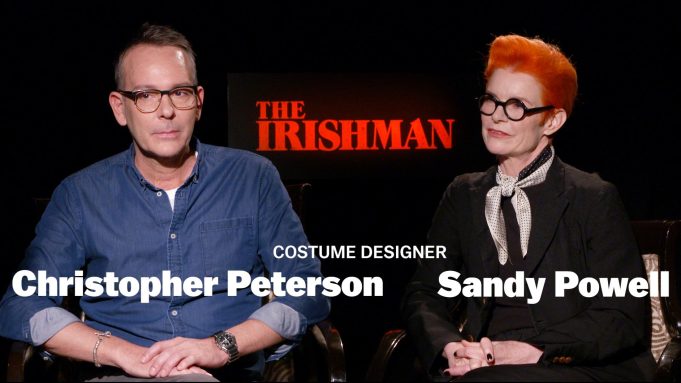 The costume designers behind Martin Scorsese’s The Irishman, Sandy Powell and Christopher Peterson have forged a kind of creative partnership over the last 14 years that is rare to see in film.

One of the most decorated costume designers in film history, with three Oscars and 14 nominations to her name, Powell met Peterson on Scorsese’s The Departed in 2005. At the time, Peterson was working as one of Powell’s assistant costume designers—as a buyer for the costume department.

This was “a pretty huge job, considering how many clothes there were,” Powell recalls. “I remember you having to find doubles of everything.”

“That job, for me, was basically coming back with like eight of everything, for every one of these men,” Peterson adds, “because they were always falling off of buildings, or getting shot, or getting chased.”

Taking Peterson under her wing on two other films—The Wolf of Wall Street (2013) and Carol (2015)—Powell started out his mentor, and wound up as his co-designer on Scorsese’s latest, to both of their great satisfaction.

“It’s a bit of a creative marriage. It’s never, ‘Oh no, we’re doing this,’ or, ‘Oh no, I want that.’ It’s basically, how do you see it?” Peterson explains of his collaboration with Powell, in the latest installment of Deadline’s Production Value video series. “And then if we see it differently, we just keep looking at it until we see it the same.”

Marking Powell’s seventh collaboration with Scorsese, The Irishman centers on Frank “The Irishman” Sheeran (Robert De Niro), a hitman looking back on his life, the crimes he committed, in connection with the Bufalino crime family, and the part he allegedly played in the slaying of labor union leader Jimmy Hoffa (Al Pacino).

The general concept for The Irishman was that “yes, this is a film about gangsters, but it’s not the gangsters that we would normally expect to see in a Martin Scorsese film,” Powell explains.

For the costume designers, part of the prep process for the sweeping gangster epic was putting together mood boards. “But the mood boards for The Irishman are very specific because they’re about real people. A lot of the time, we had images of the real people, and then maybe it was a bit more general for mood boards for crowd and the different periods,” Powell reflects. “So, you have a mood board for the early ’50s, one for the middle of the ’50s, one for the late ’50s, and the same for the other decades.”

As Powell and Peterson note, certain characters within The Irishman were very well documented—Jimmy Hoffa, most of all—meaning that photographic research informed certain looks to a great extent. With other characters in the film, there was much less to go on, so “you might get some sort of grainy newspaper clipping photograph,” Powell says, “and then you’d have to sort of, from that, invent really what the rest of their wardrobe was.”

Ultimately, the scale of the crime drama and the many time periods it covers proved to be the biggest challenges for the costume designers to confront. “There were all these really, really specific scenes, all of which required their own block of clothing that was then put onto the 6,000-plus background that we dressed, head-to-toe,” Peterson notes. “So, it’s like we’re making five different movies, in a way, because we traveled all these periods.”

For more from our conversation with The Irishman costume designers, click on the video above.