Continue to Deadline SKIP AD
You will be redirected back to your article in seconds
Skip to main content
February 25, 2020 2:38pm 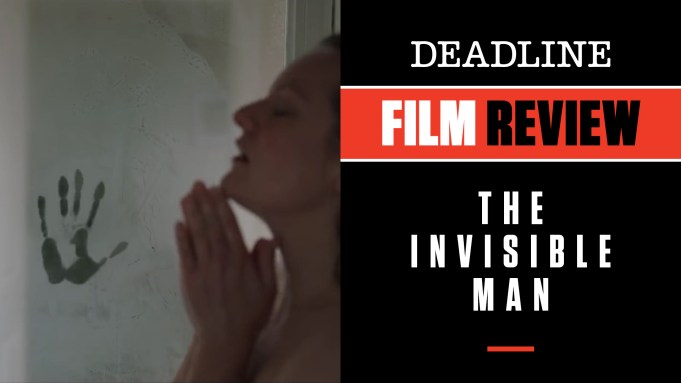 Universal has been trying for years to successfully reboot the horror classics of the 1930s that so defined the studio then, movies like Frankenstein, Dracula, The Wolfman, The Mummy, etc. In the case of the latter, the 2017 attempt with Tom Cruise was roundly panned, and a hoped-for new incarnation of The Bride of Frankenstein has so far failed to get out of development hell. But if the studio wants a blueprint as to how to reinvigorate its horror classics, look no further than the reimagining of The Invisible Man from writer-director Leigh Whannell and Blumhouse.

Other than the title character, changes for a new generation of moviegoers are not only quite visible, they are also profound and make this edition work on levels never imagined. Whoever thought I could describe a movie like this one as timely?

So what is the trick? Tell it from the point of view of the victim, who happens to be a woman. In the #MeToo age it is a deceptively brilliant, not to mention smart, idea. Trying to reboot the original, wonderful as Claude Rains was, with the invisible man’s bandaged look would not cut it with today’s sophisticated technology. But what Whannell has come up with instead is constantly surprising, full of twists and actually quite credible believe it or not. Best of all, the film is blessed to have Elisabeth Moss in the lead role of the psychologically tortured Cecilia Kass, who can’t get over the fact that her controlling, egocentric, narcissistic sociopath of a billionaire boyfriend Adrian (Oliver Jackson-Cohen) is totally gaslighting her, both in life and eventually from beyond the grave.

The movie wastes no time and offers no real backstory (not needed, since Cecilia’s face says it all) before establishing her severe angst as she plots her escape from Adrian’s high-tech glass mansion one rainy night as he sleeps. After a harrowing exit she manages to find safe harbor with a cop friend named James (Aldis Hodge) and his lively daughter Sydney (Storm Reid), afraid even to venture outside. Cecilia also confides in her sister Emily (Harriet Dyer), but feels a little more freedom when shown a newspaper report that Adrian has committed suicide and much to her surprise has left her $5 million, as explained when she is summoned to the office of Adrian’s brother (Michael Dorman).

Soon, though, weird stuff starts to happen as she sees strange movements around her, visible footprints, and eventually knock-down drag-out fights she appears to be having with herself. She becomes convinced the tech-savvy BF has found a way to come back to stalk and haunt her and continue his efforts to drive her mad. With his abilities she is convinced he has found a way to become invisible. Try explaining this to everyone in her life who watches what appears to be a descent into madness, to all but the her and the audience an unexplained and unproven bout with paranoia. It goes on from there, with Whannell’s story taking some wild turns as well as taking on real gravitas in an era when women are starting to assert themselves in new ways.

The Invisible Man works on many levels, and in fact if you took away the horror tropes of the original concept, this would play brilliantly as a psychological thriller, one in which we wonder whether it is just us, or is Cecilia really just imagining all of this in her head? Seeing the film at its premiere on the same day Harvey Weinstein was convicted gave it even greater resonance for me.  This is the story of a woman who finds herself helpless under the control of an egomaniacal and powerful man, and then finds no one who will believe her when she tries to tell the truth. More than most films in the horror genre, this one feels comfortably in line with something Hitchcock would have loved, a film that also has something in common with terrifying thrillers like Julia Roberts’ Sleeping With the Enemy, a movie I thought about while watching it. But The Invisible Man marches to its own beat in the end, and a lot of the success belongs with Moss, who nails this role of a woman under siege, both mentally and physically, with such skill I do not think it is too early to say this is first Oscar-worthy performance of 2020. She’s that good, and I hope voters remember it a year from now. The increasingly impressive Hodge, Reid, Dyer and Dorman are all excellent, but let me give a big shout-out to Jackson-Cohen, who in his brief screen time sends chills down your spine, especially in a key dinner scene. Props also to the nifty look of the film as well as Benjamin Wallfisch’s towering musical score.

Producers are Jason Blum and Kylie Du Fresne. Universal releases it Friday. Check out my video review above that includes scenes from the film.

Do you plan to see The Invisible Man? Let us know what you think.