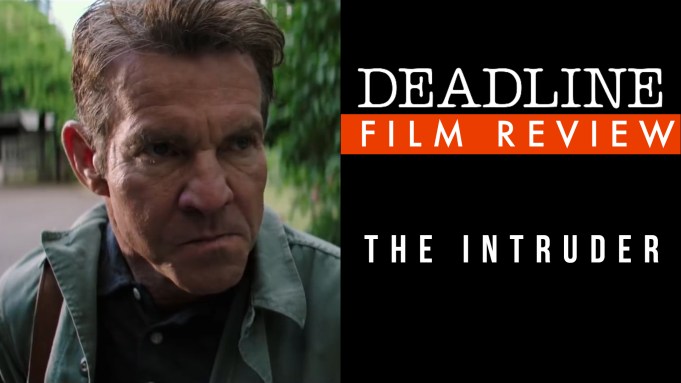 If there is one solid thing on which to recommend Sony/Screen Gems’ latest thriller The Intruder, it would be the opportunity to watch Dennis Quaid go all out playing the first villain of his big-screen career and making the most of it. As far as I can tell, the only bad guy he ever played was in a 1978 TV movie called Are You In the House Alone?, and actually without giving too much away that would be a better title for The Intruder, the new movie in which he goes all wacko.

Coming from Sony’s low-budget genre division, the studio has made several films of this ilk in which an upscale couple gets stalked by a not-quite-stable intruder. In this case the well-to-do pair are Scott (Michael Ealy) and Annie (Meagan Good), both with nice jobs, cars and lifestyle, who decide the buy the house of their dreams in Napa. It turns out it is a 100-year old beauty right in the heart of wine country and somewhat isolated in a forestry area — prime real estate for stalking.

The initially amiable seller is Charlie (Quaid), who has lived his entire life in that one house, and though reluctant to let go of it is selling to move in with his daughter in Florida. All seems normal after the purchase and the renovations, until Charlie keeps showing up, first mowing the lawn, then delivering various presents, pizza, helping with Christmas lights, and getting himself invited to Thanksgiving. A clueless Annie doesn’t ask questions but keeps telling Scott that Charlie is moving to Florida soon. Scott, egged on by work colleague and friend Mike (Joseph Sikora), begins to suspect Charlie just can’t let the house go. That’s an understatement. Let the games begin as Charlie’s motives are slowly unveiled and he goes all Norman Bates on us.

The Intruder, from director Deon Taylor and screenwriter David Loughery (Lakeview Terrace, Obsessed), is competent enough in execution, and the film looks stylish all the way. Taylor’s amusing camera angles are effective, but the plot is heavily challenged in the credibility department. Check all logic at the concession stand, and the film can be entertaining in its own twisted way, but it is one where you will be screaming at the screen — especially at Annie, who is one of those movie characters who keeps going into dark places alone and never seems to believe she is in danger, despite all clues to the contrary.

A brief dopey subplot involving Annie’s suspicion that Scott is playing around on her (a convenient device to get him to San Francisco late at night) goes nowhere but doesn’t matter anyway except guaranteeing he will be miles away when the real fireworks begin. The actors do what they can, but it is only Quaid who makes this worth checking out. He is clearly having the time of his life drifting into his psychotic side. It may have taken until he was in his 60s but, script aside, this is about as juicy an acting opportunity as he has had in a while, and he makes it memorable in the kind of movie we have otherwise seen at least 200 times, many from Sony/Screen Gems, which releases it Friday.

Producers are Roxanne Avent, Brad Kaplan and Jonathan Schwartz. Check out my video review above with scenes from the film included.

Do you plan to see The Intruder? Let us know what you think.