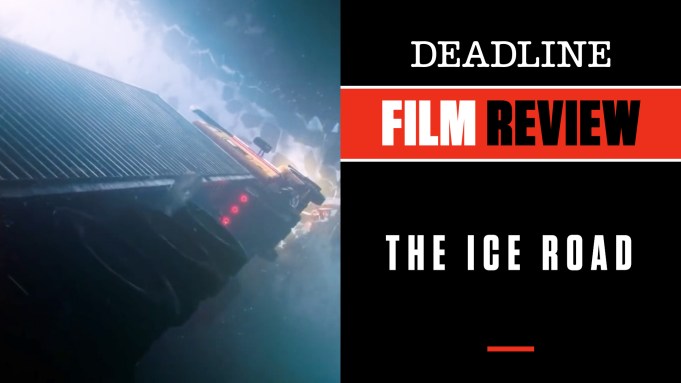 Leave it to 69-year-old Liam Neeson to show ’em how it’s done — action-wise, that is. From saving a plane in Non-Stop to a train in The Commuter to various antics on the road in The Marksman and Honest Thief, to name just a few, Neeson somehow came to be the Charles Bronson of his generation, an aging superstar who outdoes muscle-bound wannabes half his age.

After niftily showing his stuff as a snowplow driver in 2019’s Cold Pursuit, he again is proving that freezing weather conditions can’t get in his way when near superhuman strength and brawn are needed in his latest, a Netflick called The Ice Road. Neeson plays Mike McCaan and commands an 18-wheeler across barren and treacherous thin ice road in order to help get some emergency drilling equipment and oxygen to a group of trapped workers in a Northern Canada diamond mine. With the help of his military-veteran brother Gurty (Marcus Thomas), who suffers from aphasia and PTSD but is a brilliant mechanic, Neeson finds a new gig after being fired for beating up on a co-worker. Hired by lead driver Jim Goldenrod (how’s that for a great porn name?), played by Laurence Fishburne, he joins a convoy with the price tag of $200,000 to be split between them — or at least whoever survives the treacherous journey to get the needed goods to the mine where the workers have only 30 hours’ worth of oxygen to live, and argue with each other.

It doesn’t take long for trouble to start as some of the cargo vans begin sinking under the weight and deep into the freezing waters. A couple of key players don’t make it, but alarmingly it becomes clear this rather simple and clear-eyed job is more complicated when one of the drivers turns out to be a very bad guy indeed and attempts to hijack the whole thing for his own greedy needs. There also is trouble among the corporate class running the mine — who, as it turns out, don’t have their employees’ best interest in mine, as it were. Is this whole thing a setup, not only for the miners but for the truckers?

Writer-director Jonathan Hensleigh (Armageddon, Die Hard with a Vengeance) switches his attention back and forth between the ice truckers and the trapped miners, with the latter being the far less interesting focus. Fortunately, Hensleigh knows where the hard-action bread is buttered and keep his camera on the ice for the most part, staging some spectacular set pieces that kept me on the edge of the couch. (This is Netflix, folks but to tell the truth, The Ice Road has more credible hard-core action than F9, which is opening opposite it today in North America.) Throw in a tough Native American female character named Tantoo (a terrific Amber Midthunder), whose own ambitions are questioned by the cold-hearted men, and you have quite an adventure on your hands. When will they get there, and who will still be standing in the end? The drive to that destination doesn’t let up for a minute, but Neeson makes it work, not only steering into action but also with highly emotional moments involving his brother. Hensleigh said he was going for something between an homage to the ’50s trucker classic Wages of Fear (and William Friedkin’s later misunderstood but effective Sorcerer) and Of Mice and Men. The director, however, gives this its own distinct rhythms though to make it one of Neeson’s most impressive screen outings in this genre.

Shot mostly in Manitoba, the production value is super. Although the bad guys lack dimension, the cast gives its all including Benjamin Walker, Matt McCoy, Holt McCallany, Matt Salinger and Martin Sensmeier, who contributes the meatiest contribution of the trapped men. The Ice Road is strong, fun genre stuff and delivers its load in style.

Producers are David Buelow, Al Corley, Lee Nelson, Shivani Rivat, Bart Rosenblatt and David Tish. Check out my video review at the link above with scenes from the movie.

Do you plan to see The Ice Road? Let us know what you think.