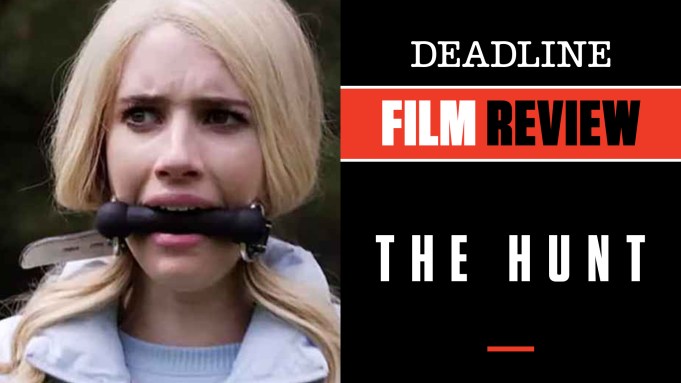 President Donald Trump condemned it sight unseen and Universal canceled its September release due to mass shootings in the news and perhaps some political heat. But thankfully the studio now is releasing The Hunt, a movie with origins going all the way back to The Most Dangerous Game in the 1920s (as does another of this week’s releases, the Brazilian Bacarau). The Hunt stands on its own as an entertaining, funny and cartoonishly violent opus that pits red state vs blue state, Elites vs Deplorables, and manages to skewer just about everyone in fine satirical fashion. Coming from Blumhouse which has merged sly social comment in several horror films such as Get Out, the Purge movies and Us, this would seem right in its wheelhouse.

Writers Nick Cuse and Damon Lindelof had an inspired idea to take the very real political and cultural divide America finds itself in during the Trump era and turn it on its head. No one is spared — from nutty conspiracy theorists on the extreme right to vegan “Libs” on the extreme left, the latter launching a “hunt” against a group of conservatives for sport and to make a point. It gets a little more complicated than that as the central figure in the middle of it all, Crystal (Betty Gilpin), is a take-no-prisoners type who seemingly can’t understand why she has been captured and set loose in order to be killed in grisly fashion. She, however, trusts no one — and as the hunt is on, that becomes a very good attribute.

In a tight and fast-moving 90 minutes, director Craig Zobel really ratchets up the body count, with all sorts of various body parts and heads exploding everywhere. No sooner do we meet a character than they are dispatched in gross and bloody fashion. Just who is in charge is left vague for much of the film, with only the mysterious disembodied voice of Athena (an excellent Hilary Swank) calling the shots — but just why is not instantly revealed. Meanwhile Zobel, Lindelof, and Cuse have loads of fun playing with stereotypes on both the left and the right, my favorite being a complete skewering of an Alex Jones-style conspiracy peddler played to the hilt by the InfoWars boss’ lookalike, Ethan Suplee.

‘The Hunt&#8217 Trailer; Betty Gilpin Is Not Someone To Trifle With

A group of actors meet their own unique fates along the way, not even bothering to be introduced by name — including Ike Barinholtz, Justin Hartley, Emma Roberts, Sturgill Simpson, Amy Madigan, Reed Birney and Wayne Duvall, among others. This all leads to the fight of fights between Crystal and Athena in a knock-down, drag-out confrontation that Swank and Gilpin play like there is no tomorrow.

So what is the real point of all this carnage? Easy. Both sides of the extreme political spectrum are so filled with venom for one another that it is inevitable we are simply all going to implode. This is a message relayed by showing the complete absurdity of the current world we find ourselves in, and is not in any way a one-sided polemic as Trump tried to have us believe (and of course he never saw it and knew nothing about it anyway). The joke of its earlier canceled release is oddly playing right into what the movie is all about. No one is spared here, and that is just as it should be. Gilpin, by the way, carries the film and is sensational. I had a great time. I say “go.”

Producers are Jason Blum and Lindelof. Universal (finally) releases it Friday. Check out my video review with scenes from the film at the link above.

Do you plan to see The Hunt? Let us know what you think.